A trip to Disney World in Orlando

Without saying, a trip to Orlando, also known as "The Theme Park Capital of the World," means a trip to the "Walt Disney World." But I must tell you at the outset that we did not go to Orlando to visit the Theme Park. That was not how it happened.

We booked our 1st Anniversary cruise to Bahamas and the starting point of the cruise was Orlando. And since we did not want to miss the cruise due to flight delays etc, we decided to go a day in advance. Then my dear husband suggested that we go a couple of days in advance and visit the World Famous Disney World as well. I don't remember being so excited but it sounded like a plan. Now, you won't believe how clueless I am about all those animated characters. Out of the hundreds of characters out there, I know just 3 including Mickey Mouse that is. But I assumed that a theme park as big as Disney world would have few interesting rides, so I should do OK without introductions to any of the characters. As you will see later, that was not how it went.

Once it was decided that we are going to the Disney World, we had to decide on which theme park to go to. There are 4 theme parks and 2 water parks to choose from  and each one of them would take at least a day to visit. Magic Kingdom was said to have the most rides and attractions out of all parks, so we bought the tickets for that and booked a room in the Disney Resort itself. Surprisingly, the room wasn't expensive and it included bus rides from the airport and to all the theme parks. It was a good deal and the room was decent though there were not a lot of restaurant options in the resort. Thus began our trip to the World Famous "Disney World".

Close to the entrance of the Park was the Cinderella Castle with a festive atmosphere.

Once inside the Park, you have all these characters everywhere and were hard to miss.

And there are "attractions" such as Haunted Mansion (which we all know is not haunted, but that's not the point anyway) and several others which I do not remember. 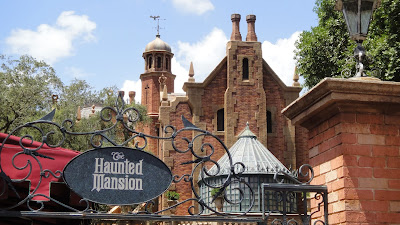 Out of the several rides, we found Space Mountain and Splash mountain to be OK and Buzz Light year's Space Ranger Spin to be good. In fact, Buzz Light year's was the only ride we willfully waited in line to do it the second time. But there is one ride that I cannot afford to not mention - Tomorrow land Speedway (miniature raceway supposedly). It was our first ride at Disney World and we waited for about 30 minutes in line for it. And what we got was a small car (in which we could hardly fit in) that goes along a centered guided rail very slowly and the moment you try to steer it a few inches to the left or right, you hit the rail at the center, leaving you sitting uncomfortably for half a mile with nothing much to do. Who ever told us to get onto it?

Three things you need to understand clearly at Disney World. There will be lines, there will be long lines and there will be longer lines. And you need to strategize to be able to do all the rides in a day - Like using a FastPass. You can learn more about it here. Not that you will miss a lot if you don't, but you know the human tendency to try and do everything even if it means you are drop dead tired by the end of the day and don't remember anything that you did during the day.

To be fair, everything in Disney World, including the rides were designed for kids (alas, what did I expect?) and thus were far from adventurous. Most of it was, for lack of better word, boring? When they said "Fun for your entire family", I am sure they meant your kids. I mean, the Cinderella Castle was huge and all but it wasn't worth, after all, to go to Magic Kingdom without kids! That was my conclusion. What do you think?