Flagstaff is a cool city in Arizona. At an elevation of nearly 7,000 ft, it has an alpine ski resort called Arizona Snowbowl and a cross-country skiing area called Arizona Nordic Village, two of the four ski resorts/areas in all of Arizona. And it is located just 3 hours away from Phoenix, making a day ski trip totally possible. And when I say 3 hours, I don't mean 10+ hours that it takes to get to Tahoe ski area from Bay Area in winter (which also is only 3-4 hours away from the city if you were to consult Google Maps).

I took my first 2-hour ski lesson in Arizona Snowbowl, Flagstaff in 2015. I fell down several times as expected. However, with the heavy ski boots, I could barely get back up on my feet which meant that I spent a lot of time sitting on the snow. It was definitely an experience but I don't recollect it being a lot of fun.

Fast forward a few years, I moved back to Arizona after living in Bay Area for 4 years and never gathering the courage to try skiing again even with the "proximity" of the popular Lake Tahoe. When my friends suggested a trip to Flagstaff in February 2019, I decided to give snowboarding a try.

We booked a lovely cabin with a beautiful deck in the back where you could watch the snow fall. 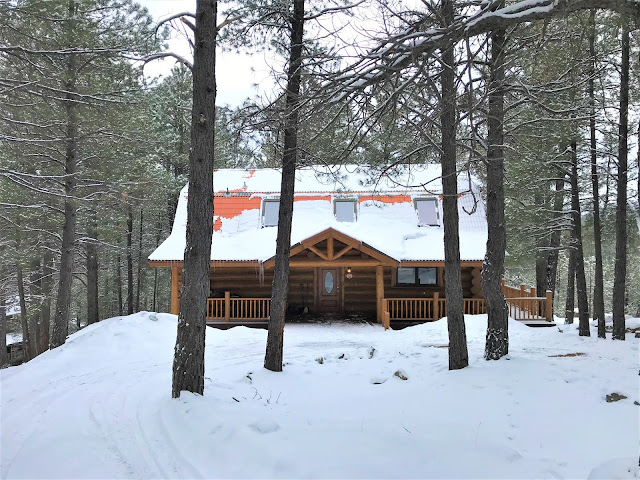 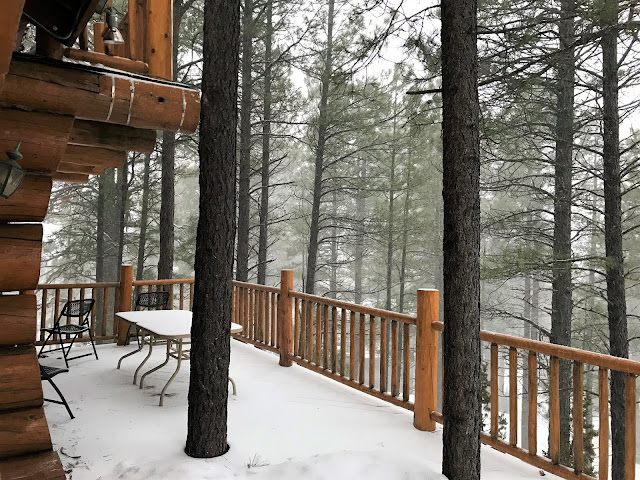 We reached on Friday night and when we got up the next morning, it was snowing. Living in Phoenix (and Bay Area) and usually traveling in summer, I don't get to experience many snowfalls. I felt lucky to have been there while it snowed. I savored the snowfall from our lovely deck. 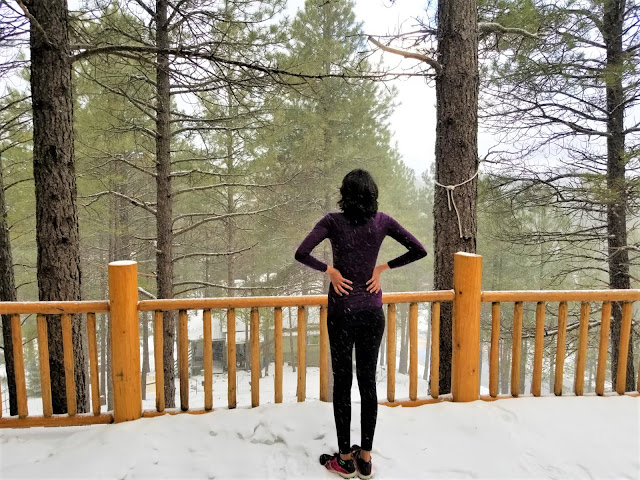 It snowed on Sunday morning as well. I immensely enjoyed sitting on the couch and reading a book as the snow fell and accumulated on the deck. I loved reading on the beach while listening to the ocean waves in Hawaii and Mexico, in a redwood forest overlooking the giant and elegant redwood trees in California, in my own hammock while listening to the birds in our pretty lake facing backyard in our house in Phoenix. There is a certain charm the background creates that is hard to explain, as you immerse yourself in the book and let your imagination take over. Now, I will add reading as the snow fell and accumulated on the deck to the list. I would definitely love to do it again. 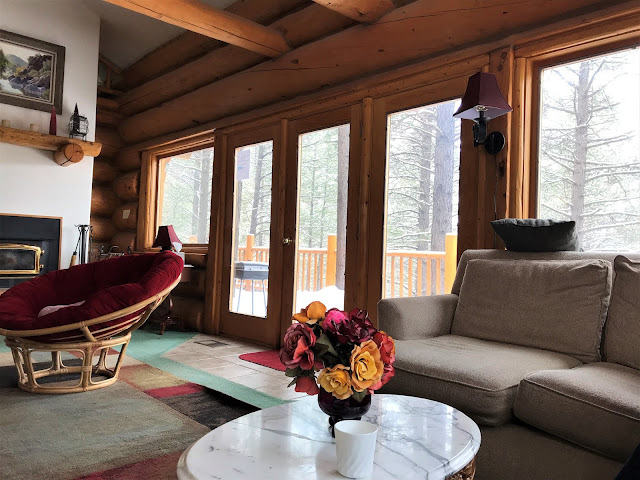 When we reached the Ski area, it just stopped snowing. The sky was grey, all the trees were covered in snow and there was fresh powder snow everywhere. It was one of those days when cloudy grey skies look super beautiful.

We took a 2-hour snowboarding lesson this time and it felt much better. The shoes were lighter and my feet didn't twitch. Fall I did, but I was able to get up without any help which made it easier to try again and again. Eventually, when I was able to snowboard for a bit, it felt good. We spent about 5 hours on the snow and it was fun, though I ended up with a sore butt and shoulders for the rest of the week. 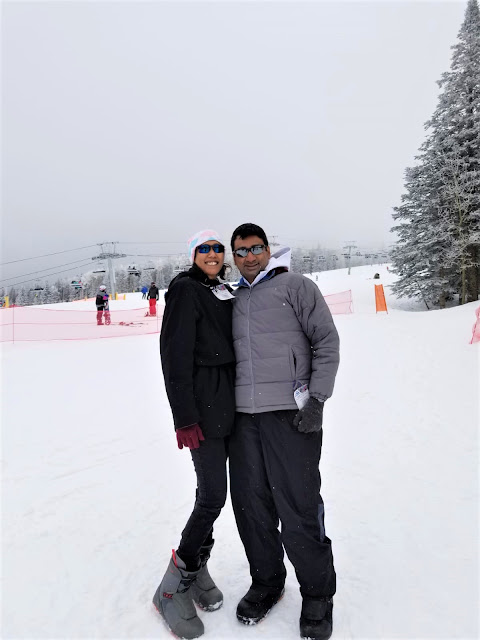 We rented our gear from 'Peace Surplus' in downtown Flagstaff the night before, which helped us avoid the long queues at the Snowbowl on our snowboarding day. It was not only cheaper but we also got our correct sizes for boots. Due to the long lines at the Snowbowl, sometimes it is difficult to get the correct boot size and you know what a pain that can be.

If your vehicle isn't 4-wheel drive or you aren't carrying snow chains, you will have to park at the base and take the free shuttle to the top. While it was convenient when we came in, we had to stand in a long queue to take the shuttle on our way back. Cold and exhausted, I wished we drove up instead of parking at the base.

Wish you a happy winter trip to Flagstaff!