My birthday trip to Page, AZ

Page is my second favorite place in Arizona after Sedona. It is a small laid-back town near the Arizona-Utah border but is home to some World famous attractions such as Antelope Canyon, Horseshoe Bend, and 'The Wave'. Even though you may have not heard of these names, I bet you have seen these images on social media and wondered where these magical locations are.

We first went to Page 9 years ago in 2011. We camped near Lake Powell for a weekend in October and visited Antelope Canyon and Horseshoe Bend. I will never forget the sunrise we saw in Lake Powell where the lake shimmered and the surrounding red rocks slowly came to life as the first rays of sun hit them. It was spectacular to watch. That afternoon, we took a tour of the Antelope Canyon which was fascinating and then we went to see the sunrise at Horseshoe Bend the next morning. I fell in love with the view of the Horseshoe Bend and always wanted to go back and spend more time there. And when we looked down from the viewpoint, 1000 ft. below we saw a few people kayaking down the Colorado river. If you focus on the bottom left of the above picture of Horseshoe Bend, you can see a small beach area and a kayak there. Staring at those kayaks back then, I think I knew I was going to do that someday, but did not know for sure that we would do it in our own kayak on a self-guided trip 9 years later.

Back to October of 2020, I was making plans for a Covid-friendly birthday celebration. And revisiting Page seemed like a good idea. We could drive there, rent a boat on Lake Powell for a day followed by a day of kayaking on Colorado river near Horseshoe Bend. And while Antelope Canyon tours were closed due to Covid-19, I learned that we could kayak to the canyon and see a portion of it on a self-guided tour! Though 1st week of November is not ideal weather for boating, I wanted to give it a try. Eating a Chocolate cake on a powerboat in the middle of a lake surrounded by canyons sounded like a great idea. So off we went for a 4-day trip to Page and though not everything went as per plan, it was still a great and memorable trip. And we bought our own inflatable kayak for this trip too! 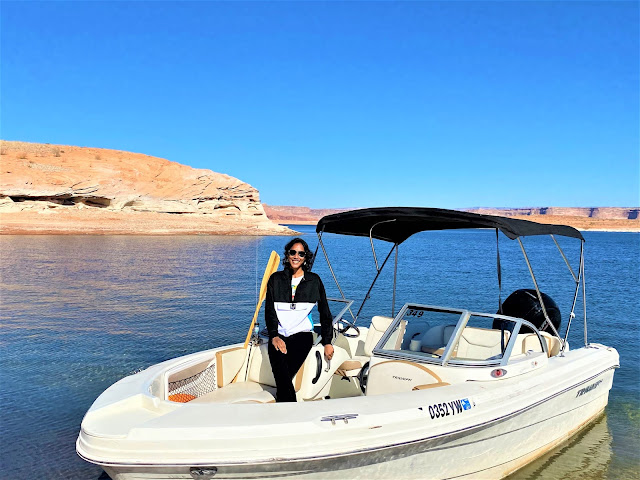 We rented a 19-ft powerboat to spend a day on Lake Powell. Winter boat reservations for the day are from 9 am - 3 pm. The plan was to be there around 8:15 am, finish the check-in and formalities and be on our way at 9 am. I wanted to visit the 'Rainbow Bridge National Monument', which is only accessible via boat or by hiking 16 miles with a permit, and it is a 4-5 hour round trip from the Marina. But when we reached the Lake Powell Marina at 8:15 am, they haven't opened yet. After a few calls and waiting for a while, they finally opened around 9:10 am and it wasn't until 10 am that we finally got our boat. Also they told us that the fuel station near the Rainbow Bridge is closed, which they did not mention while making the reservation. So, we dropped the plan of going to the Rainbow Bridge and decided to check out a few nearby canyons accessible via the boat.

The boat looked good though, and I was happy to finally get on it. It took a while for us to get our bearings on the lake and to figure out which direction the canyons are. But once we did, it was fun. The wind was cold but that didn't stop us from going at 40-50 mph. Since it was off-season, there were only a couple of other boats but whenever we passed by them, the wake would rock our boat making it feel, briefly, like an adventure. We took turns steering the boat and then stopped at a beach for lunch. The weather was great for picnic and we had a leisurely lunch followed by cake cutting. 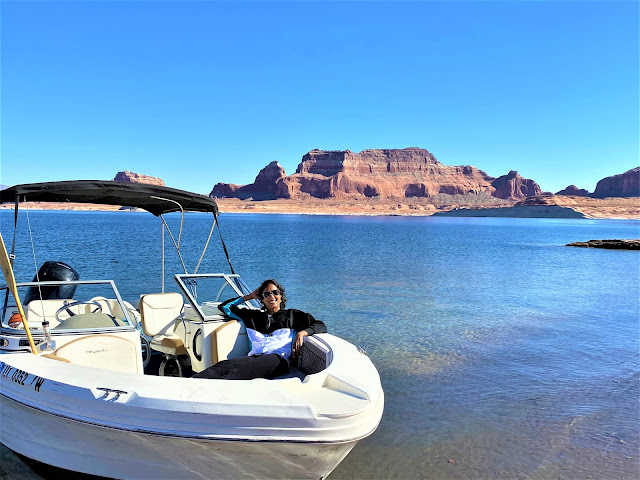 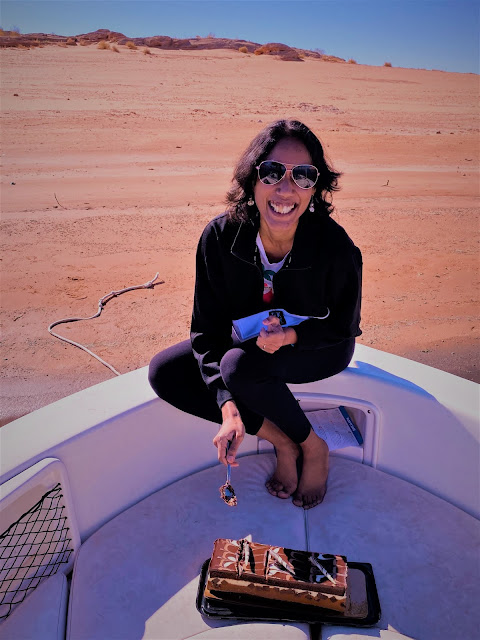 The day seemed to be getting better. We got hang of the boat and the navigation and our speeds increased despite the cold wind blowing at us. After checking out a couple of canyons, we decided to turn back. We had an hour to return the boat and we were getting closer to the Marina (may be 20 minutes away), so we decided to check out one last canyon that we missed earlier. A quarter of a mile into the canyon, the path got narrower and before we could reduce the speed and adjust, our boat hit a rock on the shallower side of the lake. And it stopped. It wouldn't restart and it wouldn't move forward. We waited a few minutes and tried again. Nothing. After a few tries, it was clear that the propeller hit a rock and the boat is dead. 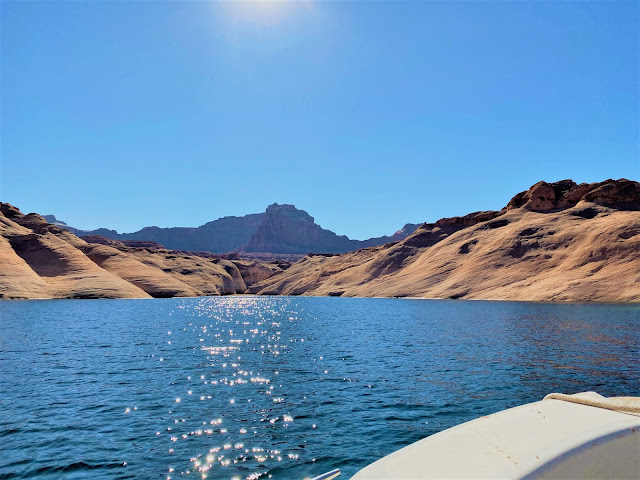 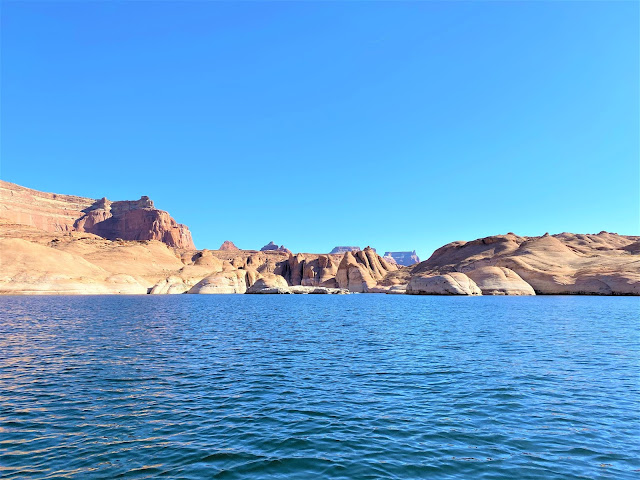 We tried to call the Marina but there is no cell phone signal. The boat had a radio but that wouldn't work either. There we were, the 2 of us on a dead boat in the middle of a canyon with no cell or radio signal. Since this canyon was a detour from the main lake area, our only hope was that someone else would take a detour like we did. Several minutes passed. Nothing happened and no one came. Now, it seemed like the real adventure had just begun. All the movies we have seen with desperate people yelling at helicopters in the sky flashed right in front of our eyes.

But just before panic could set in, there came a couple on a boat. We waved our hands at the boat and asked if their cell phone or radio signal worked. Nope, it did not. But they were super nice and offered to take us out of the canyon so we could get a signal. So, I went with them leaving my husband with the boat and called the Marina for help. After that, they dropped me back and we waited there for another hour before help arrived. Funnily enough, a helicopter flew past us and I was thankful we did not have to yell at it hysterically waving our hands. Finally, the repair guy arrived and changed the propeller in 5 minutes and told us they would charge $200 extra for it. Anything seemed ok at that point. We were happy to not get stuck there, though we had enough food and cake if we had to stay the night on a dead floating boat in a canyon on the lake ;)

After an eventful birthday, we had dinner outdoors at a local restaurant next to our AirBnb. We invited the couple, who helped us with the boat, over for dinner but they couldn't join us. We went home and packed lunch for another interesting day the next morning. 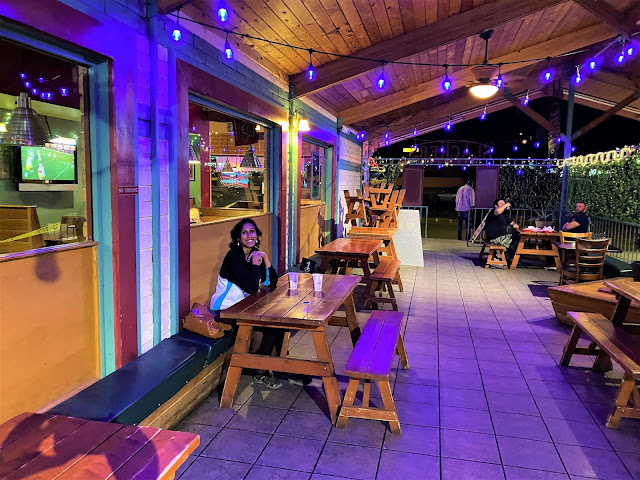 We had an early day the next morning. We got up at 4:30 am and left for Lee's Ferry, which is an hour away, at 6 am. I made a reservation with 'Kayak the Colorado' for a one-way drop-off via boat at Horseshoe Bend from Lee's Ferry along with our kayaks (referred to as backhaul service on their website).  From there, it is a 10-mile kayaking down the Colorado river back to Lee's Ferry where we parked our car. There is no other way to reach the bottom of the Horseshoe Bend unless you want to kayak upstream which is pretty tough (trust us, we tried :)

As we drove to Lee's Ferry in the morning calm, the bright and beautiful sunrise brought orange hues to the sky, lovely shades to the red rocks and huge smiles to our faces. We saw Marble Canyon on our way and had plans to hike the nearby 'Vermilion Cliffs' the next day (this is where the famous 'Wave' is, though to access that we need a super-hard-to-get special permit, which we didn't have).

We reached Lee's Ferry at 7 am, inflated our kayak and were ready for the 7:30 am pick-up. The pick-up was prompt and they dropped us off at the small beach area near Horseshoe Bend 30 minutes later. After checking out some petroglyphs nearby, we started to kayak around 9 am. Kayaking downstream is pretty easy and we covered 4+ miles in the first hour. At this rate, we would have returned before noon, so we decided to slow down and enjoy the scenery.

The red rock canyons and the Colorado river made for such a scenic and peaceful setting for kayaking. It is perhaps one of the best places in the state to kayak. It reminded us of our Zion Narrows hike last summer, where we hiked 16+ miles through the Virgin river in the Zion canyon, which was fantastic. 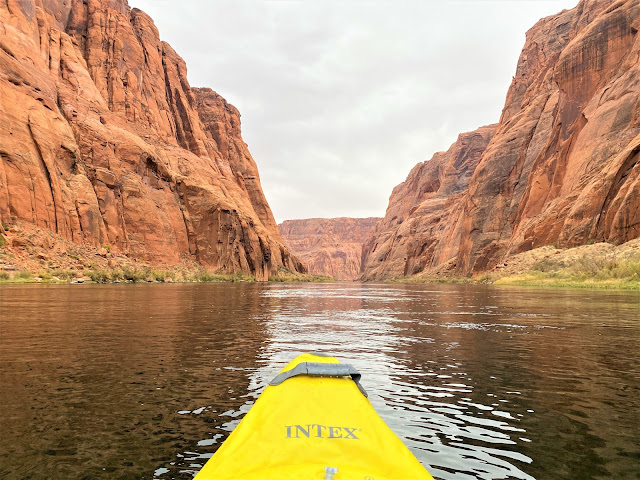 After a couple of hours, we stopped at a small grassy area for early lunch. It was cold but the Sun briefly showed up and we had a good lunch. 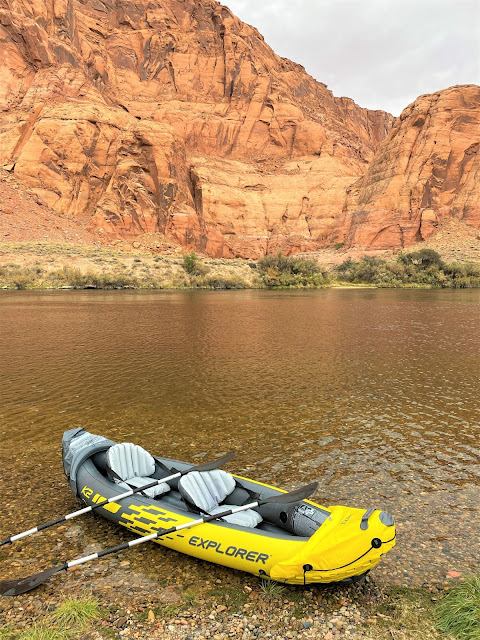 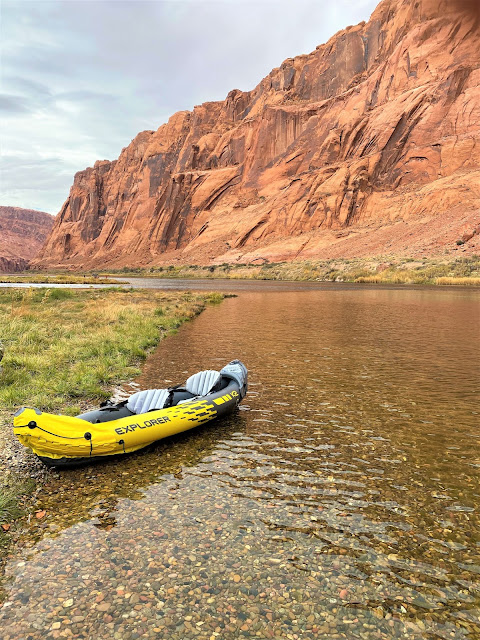 As we approached the last couple of miles, we came across a spot that was so scenic that we did not want to leave. These bright and beautiful chiseled red rocks are what make Arizona special and it is hard not to fall in love with them. And we were lucky to be doing this in off-season, as the calm added a lot of charm to the place. 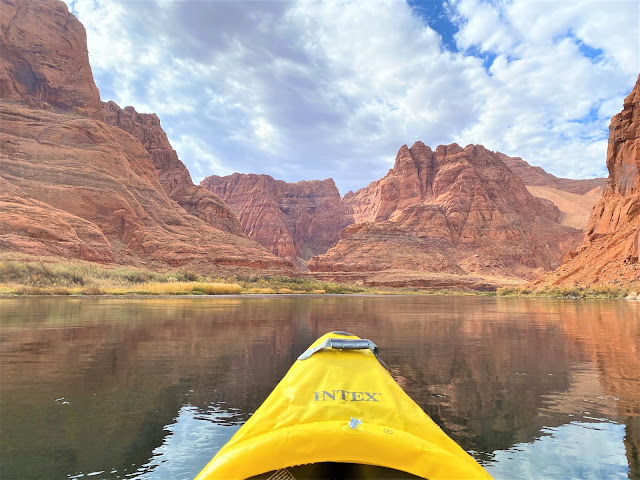 We were back at Lee's Ferry around 1 pm uneventfully and our inflatable kayak did pretty good. We packed it in and were on our way back around 2 pm, before the winds were expected to hit.

I woke up early the next morning to huge winds and nevertheless went to Horseshoe Bend to watch the sunrise. Back in 2011, Instagram was in its early days and Horseshoe Bend wasn't as popular as it is today. You could just park your car in the dirt area and walk to the view point to watch the sunrise. Now, there is an entrance, a paid parking lot and a marked trail to it. And they only open it at 6:30 am in Winter, though it says 24 hours open on their website. I know because I was there at 6 am on a windy winter morning and waited for 30 minutes for someone to show up and open the gates. When they finally opened the gates, I was the first one to enter. I spent a few quiet moments there before the crowd joined. The winds seemed to get worse every minute but I still spent more than an hour there, just taking in the views. This place has an attraction that is hard to describe.

I have seen forecasts say 'Windy' before, but didn't realize how disruptive it can be to daily life until then. It was all a huge open area with minimal buildings to obstruct, so the wind was having a field day, so much so that it was getting hard to walk in a straight line! There was no chance of kayaking to Antelope Canyon that day and even hiking seemed very difficult. So, we decided to stay indoors and watch the election news the whole day (which my husband had been obsessively following pretty much the whole week by then).

We bid goodbye to Page the next morning but am sure we will return to this lovely place again. I will leave you with this picture of sun rays hitting the Horseshoe Bend, so you can plan your trip soon :) 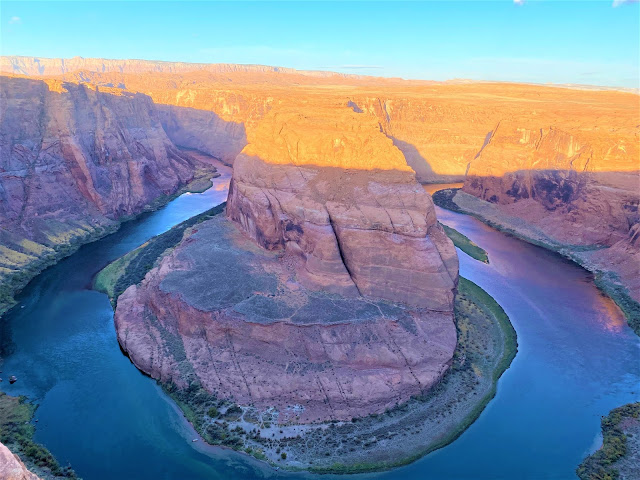