Cascade Pass and Sahale Arm Hike - One of the best hikes in the Cascades!!

Washington is my second favorite state in the US after California for its natural beauty. It has some of the most beautiful national parks, majestic snow capped mountains and dreamy lush rainforests. We were lucky to visit and hike in all 3 National Parks in Washington - Olympic National Park, Mount Rainier National Park and North Cascades National Park. I fell in love with the Cascades during the Maple Pass Loop hike on our first trip in 2021. I have never seen so many mountains in one place prior to that. I was overwhelmed with joy and wanted to come back again. We planned to do the Cascade Pass and Sahale Arm hike back in 2021, but the Cascade river road was closed for the last 5-6 miles due to damage, so we had to cancel that plan. But I am so glad we did the Maple Pass Loop hike back then, as I absolutely loved it! 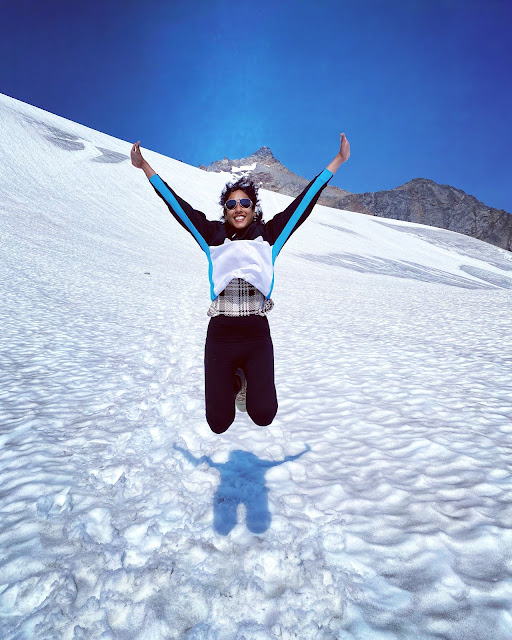 I made a plan to go back again and do the Cascade Pass and Sahale Arm hike (~13 mile round trip) in the summer of this year (for the Labor Day weekend). 12 days prior to the trip, I was hit by Covid. I felt weak the first few days but recovered quickly, though I wasn't sure if I could actually do the hike. I was already in Seattle by then and the Cascade river road is fully open, which doesn't happen every summer, so I decided to go ahead with the hike and do as much as I can. I was able to connect with 2 other hikers via AllTrails and we made a plan to carpool for the hike - meet at 5 am on the day of the hike and hit the road.

The drive to the Cascades from Seattle was idyllic. Mountains, meadows and streams in this area make your heart melt in the morning. It is a 3-hour drive to the trailhead and the bumpy gravel section  in the last few miles can take a while to navigate (and there is no cell signal). We reached there around 8:30 am after a couple of stops. As soon as we got out of the car, the grandeur of the Cascades hit us like a lightning. The views were jaw dropping even before we began the hike. Right at the parking lot, we knew we were in for a treat for the rest of the day :)

The hike began in a forest setting with several switchbacks through tall trees. The Cascade Pass is 3.7 miles from the trailhead, so I hoped to at least get there and enjoy the expansive views, even if I can't get all the way to the Sahale Glacier which is 5.7 miles from the trailhead. We could see the striking sharp-edged mountains through several openings along the way. 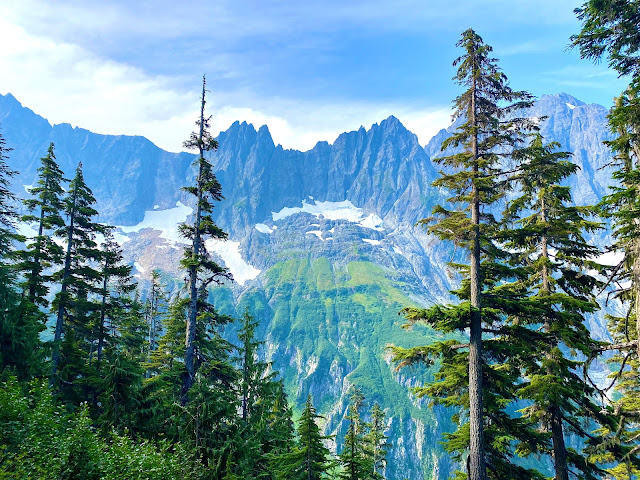 About an hour and half into the hike, the mist started rolling in. What seemed like cool clouds that are about to gently kiss the mountains and pass along quickly engulfed them and within seconds appeared to swallow them in whole. I gasped in delight as I watched the mist slowly rise up, gently fill the valley and eventually cover up the entire mountain range. It was very exciting to watch the whole scene unfold in front of my eyes and it made for one of the most memorable moments of the hike.

The next several hours were like a game of hide and seek between the mighty mountains and the mild mist. In this Nature's game of give and take between the various forces, we were definitely the winners as it added to the thrill and excitement throughout the day. After about 2 hours from the start, we reached the Cascade Pass, which had glorious 360 degree views (300 of which were covered in clouds) :) 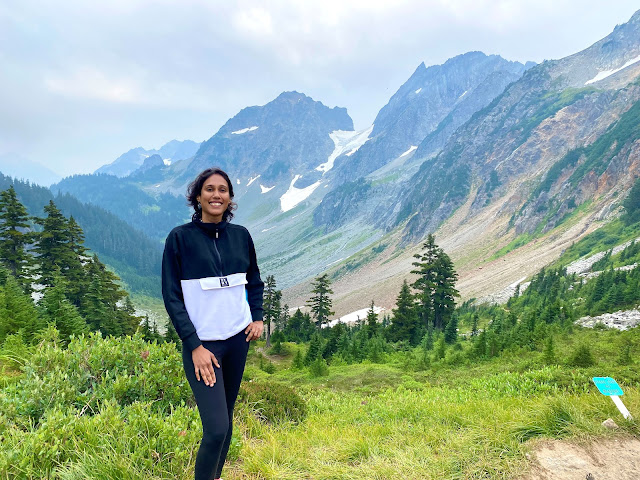 Beyond the Cascade Pass, I took left at the trail split to go towards the Sahale Arm. There were more switchbacks but now they were completely covered in clouds. About 30 minutes later, I reached a ridgeline with some amazing views. The clouds cleared up briefly and I saw the beautiful "Doubtful Lake." I was so drawn towards the lake that I took a few steps down and settled into one of the spots with a spectacular view of the lake. Sitting at the beautiful lake, facing the majestic Cascades, I wished I knew a word that is grander than "grand" to describe the splendor of these mountains! It is so hard to put into words the feeling of peace, calm and gratefulness that I experienced in the presence of pure grandeur. Being so close to the huge mountains was pretty awe-inspiring and it is moments like this that make every step of the hike so worth it! It is in places like this that I get to connect the most with my inner self and would I not climb mountains for moments like this!! At least until I can get there through meditation, which seems ever harder as of now :) 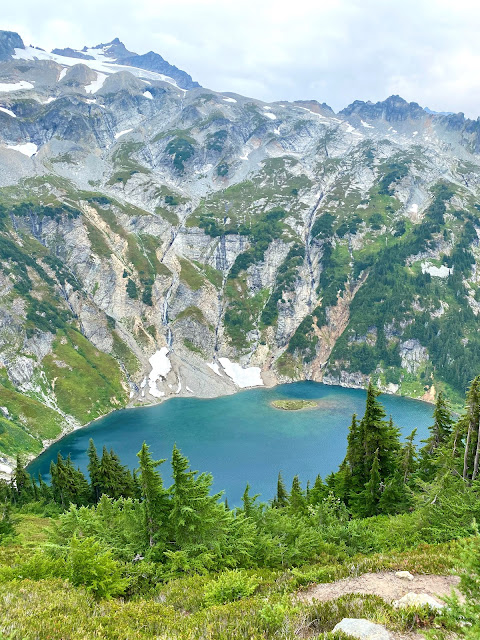 After spending several peaceful minutes at the lake, I got back on the trail and proceeded to hike. There were more views of the lake for a while, after which I stopped at this place with an excellent view for lunch. 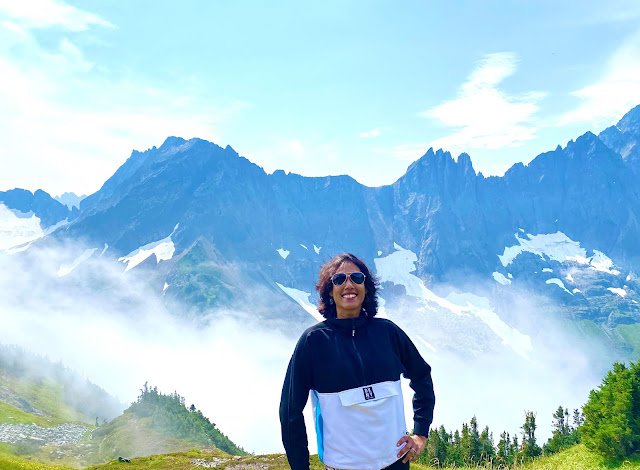 After lunch and a short break, I began hiking again. The last part of the hike that takes you to the Sahale Glacier Camp is steep and challenging, especially because of the loose rocks and dirt. But the views all around were expansive and quite encouraging. Having just recovered from Covid, I wasn't sure if I could stretch myself to do this part of the hike but I was feeling pretty good after lunch, so I decided to continue. I also found some entertaining company in a guy I met here and with several breaks, I finally reached the Sahale Glacier Camp, which is at 7,600 feet elevation, an hour later. We did have 360 degree views of the gorgeous snow-capped mountains and lovely alpine lakes.
After taking a well-deserved break here, we decided to take a closer look at the glacier. The plan was to just touch the glacier, then turn around and go back home. But once we got to the glacier, we were tempted to hike up the glacier for a bit. The guy I met a few minutes ago on the hike had crampons, so he was going to go ahead of me and make deep footsteps which I can then follow. It wasn't the best idea to hike up the glacier without proper gear and that became pretty clear after about 0.25 mile when I looked back. I decided to head back (thankfully) and I was pretty much freaking out for the next 15-20 minutes for fear of slipping, even though I was only slowly sliding down while sitting on the ice. Lesson learned! It was fun nevertheless ;) 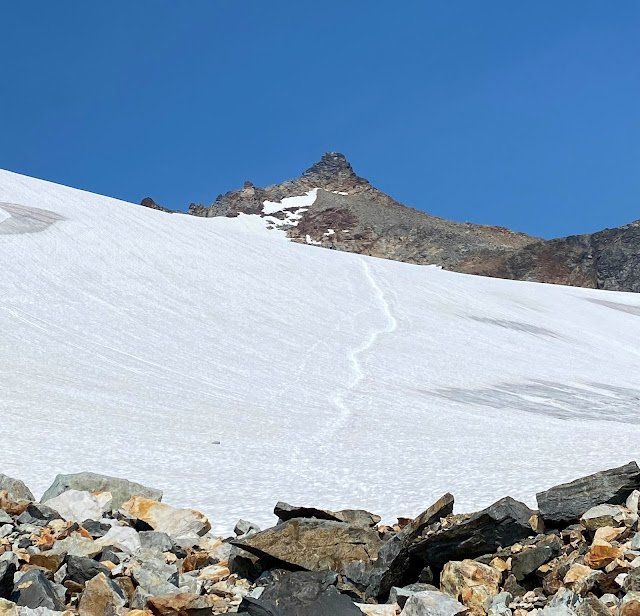 As I was heading back, I met the 2 folks I carpooled with and we all hiked back together. I so wished I brought my hiking poles, as we headed down the steep portion of the hike with loose gravel. We did it with the utmost focus so as to not slip or twist the ankles. Once past that, we had to wait for a bit for the mountain goats that were taking a break on the trail but otherwise, the rest of the hike was uneventful and felt much longer (as it always does on the way back, after all the thrill of the day has worn out) :) 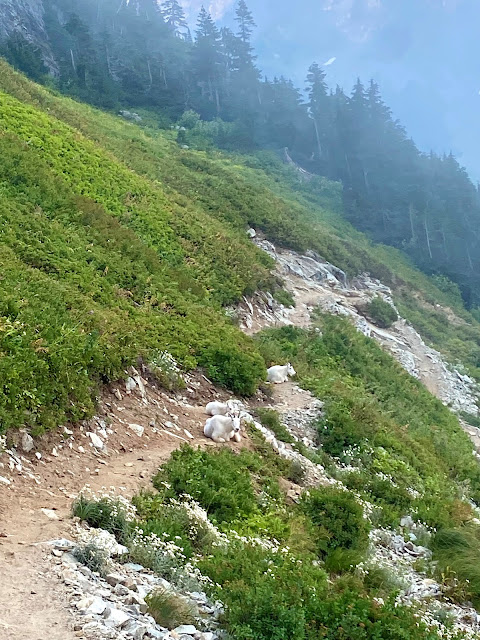 Overall, the hike was spectacular, the scenery splendid and the experience wonderful! I would definitely recommend this hike and the Maple Pass Loop hike in the Cascades for all nature lovers 💗
P.S: I heard that both the hikes are even more amazing and a feast for the eyes in the Fall Colors, so if you are in the area at the end of September or the beginning of October, head out to the Cascades as a day trip or stay at the North Cascades Inn (formerly Buffalo Run Inn) at Marblemount. We did not have cell phone signal throughout the hike or on the Cascade river road leading to the trailhead, so if there are multiple people in your party, stay together :) We did not need a National Park pass for this hike (though I had one).
Labels: Adventure Hiking National Parks