It may not top the list of best places, but it definitely has it all. Decent beaches, green hills, vineyards, lots of pubs  and a pleasant weather to top it all. We spent the last 3 days of 2011 including the New Year's eve in San Diego and it was fun.

For people visiting San Diego for the first time, Sea World, San Diego Zoo, Legoland (if they have kids) are usually on the list of things to see. We, instead, on our first trip decided to avoid these and go around the city to get a feel of it (U know what I mean, right). So, after reaching San Diego in the evening, we first went to the historically important Whaley house, touted as the number one most haunted house in the US according to the Travel Channel's America's Most Haunted. I liked the dramatic style of the lady who narrated the mysterious story of the old Whaley house while taking us through a small tour of the house and the accompanying kids among the audience who seemed so fascinated by the house as to be visiting it every six months. And, if you ever happen to visit the Whaley house, don't forget to take a camera along with you as it is said that many people do find ghost-like creatures in their pictures. In the words of the narrating lady, "The camera captures what your eyes can't." Alas, we did not carry one, so I can't really tell you what ghost-like means. We then walked along the streets of the old town and had dinner in one of the Mexican restaurants.  The old town was both cute and charming. Then, we proceeded to the downtown, had a tough time trying to find a parking space near the gaslamp quarters, finally managed to find one few blocks away, and walked into a pub on 5th avenue. Thus, ended our first day, rather night in San Diego.

My husband loves wines and I haven't been to a vineyard before, so next morning, we headed to the vineyards in Temecula, north of San Diego. Though the grapes have been harvested and the vineyards are dry, we still enjoyed the pleasant countryside views and the farm houses. We then went to Bella Vista Winery, the first commercial vineyard in that area and did our wine-tasting there. It was good (Why not, if your day begins with drinking ;)

Ok, it's already past noon on our day 2 in San Diego and we haven't yet been to a beach! That's outrageous!! Immediately, we drove to the Ocean Beach but the waters were a little too cold for our liking. So, we decided to have a heavy lunch in a beach facing restaurant and then take a walk on The Pier (See below). It is a long walk, but nothing to worry, there is a coffee shop mid-way, the services of which we gladly accepted and later chatted with people catching fish on the Pier.

In the evening, we went to Belmont park and took a ride on the Giant Dipper Roller Coaster built in 1925. We did have our doubts, but we came out safely. We then headed to the Coronado Island to visit Hotel Del Coronado, heralded as one of America’s most beautiful beach resorts. The Coronado Island is hep and happening and we enjoyed our little stroll there.


Now, December was not the right time to visit the vineyards or the beaches in San Diego, but it is a perfect time for something else and we decided to utilize the opportunity. And that is whale-watching! December - April is the time when the California gray whales migrate from the chilly Alaskan seas to the warm water lagoons of Baja California where they give birth and rear their young. So, we took a 3 hour whale watching tour by H&M landing tours next morning. We enjoyed spotting the whales from a distance but dolphins which came close by were actually more fun. 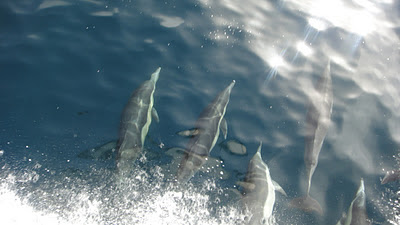 We then went to Cabrillo National Monument and Point Loma Lighthouse, the second most visited national monument in the US after Statue of Liberty according to http://www.lajollabluebook.com/blog/cabrillo-national-monument-point-loma-lighthouse/, located on a hill top. The views of the beach, San Diego city and the US naval base from this point were awesome and it completely gave us the feel of a hill station overlooking a beach. Sitting on a bench behind the Cabrillo Monument and looking at the sea was one of those beautiful peaceful moments for me which I thoroughly enjoyed and plan to do again. Walking on the long winding roads on the hill near the Point Loma lighthouse with the sea on one side and greenery on the other side, I began to like San Diego.
But, our trip is almost coming to an end except for a big party for which almost the entire trip was planned. That's the New Year's eve cruise party of 'Flagship Cruises'. Though we couldn't see the fireworks due to the fog, the party itself was decent fun.
Labels: California Cities