If a beach consistently ranks among the top 10 best beaches of the world (in TripAdvisor and several popular travel blogs), you would be tempted to see what the fuss is all about, no? No wonder when we planned our 5th Anniversary trip to Puerto Rico, spending a day at Playa Flamenco in Culebra island, located 20 miles off the coast of Puerto Rico was firmly on our list of must-do things.

So, the day after we landed in Puerto Rico, we got up early morning (yes, that's what we end up doing on most holiday trips), packed our beach bags and snorkeling gear and set off to Fajardo terminal to stand in line to get tickets for the Ferry to Culebra. We heard several scary stories of people standing in lines at the Terminal since 4 AM during summer and major holidays as the Ferry is the cheapest means of transportation (about $4.50 round-trip per person) to Culebra, other expensive options being hiring a private boat or taking a flight. Since we went on a weekday in the 3rd week of August after the schools reopened, our line was relatively short (may be 50 people ahead of us) when we reached there around 7 AM. A cafe was conveniently located near the Terminal so people can have breakfast while standing in line, which I thought was pretty cool. We ate their Quesitos which tasted good. We got our tickets in less than an hour and then we had to stand in another long line to board the Ferry which is scheduled to leave at 9 AM.


About an hour or so later, we landed at Culebra and were treated to this view from our windows.

As we disembarked the Ferry and even before we began to wonder how to get to the most popular beach, we saw several buses and vans shouting 'Playa Flamenco'. That was easy. We got into one of those for $3 per person and landed in Playa Flamenco about 20 minutes later. There were Jeeps and cute golf carts for rental at the Terminal, and though we were tempted, having been up since 5 AM local time (which is already 3 hours ahead of our current time zone), we decided to just spend the day at the beach and take the van back to the Terminal to catch the Ferry that leaves at 5 PM. 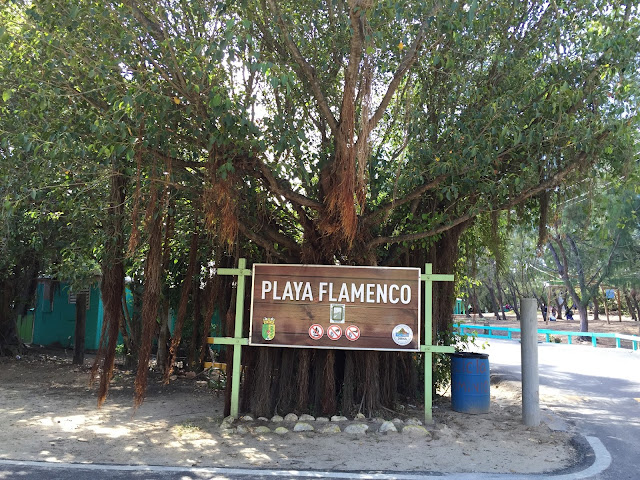 Even with all the hype, Playa Flamenco did not disappoint. Though the water color wasn't turquoise green (like it was in Bahamas where I almost shrieked with excitement), it had everything one could ask for in a beach - Super soft white sand, crystal clear waters, bright sun and palm trees for shade, a 1.5 mile long beach with space for everyone, relatively calm waters and accessible coral reefs making it ideal for snorkeling. But what makes it a top 10 beach, in my opinion, is what it does not have. It does not have giant concrete buildings staring in your face, you cannot see cars or commerce while sitting there, there are no busy vendors renting motorboats, banana boats or offering any type of water activities (with the exception of snorkeling tours from mainland), which makes it truly relaxing. It does have a parking lot, bathroom facilities and beach shacks selling food and drinks in an open area behind the trees, but as you sit under that tree and stare at the beach, you can leave the world behind.

We had fun playing in the waters, snorkeling near the reef to the far right end of the beach and just relaxing under the coconut trees eating our packed lunch and drinking Pina Coladas and mango smoothies. At 4 PM, we took a van back to the Terminal to stand in yet another line to board the Ferry. Though the whole Ferry process was a bit slow and tiresome, it was a fun day and well worth the trip!

P.S: When you buy your round-trip ferry ticket, you have to pay extra ($1) for cooler, chairs etc., they may not tell you at the ticket counter but the guard that checks your ticket when you are about to board will send you back to pay for it.