A memorable day in the Grand Teton National Park

It's summer again!! That time of the year when we not only have longer days, but several long weekends too in the US. It is also the time when most of the National Parks are fully open as the snow melts and the roads clear up, making it the best time to explore them to your heart's content. Continuing our tradition of visiting National Parks for the July 4th weekend, this time it was  a combination of Grand Teton National Park which we are visiting for the first time and our favorite Yellowstone National Park which first spelled its magic on us 4 years ago.

We met our friends in Salt Lake City and drove from there to Grand Teton National Park on Highway-89 criss-crossing between Utah, Wyoming and Idaho. The drive along vast meadows dotted with wooden cabins amidst tall pines had us all day dreaming while the super small towns with population in hundreds added to the charm. We really enjoyed the drive and reached Jackson in about 6 hours. Jackson is a cute touristy town with several restaurants and shops that tempted us to come back for dinner, though we ended up having dinner in the lodge inside the Park. We, however, picked up our grocery from Albertsons in Jackson before heading to the Grand Tetons. We recommend picking up most of your grocery from here for your stay in Grand Tetons/Yellowstone, if you are coming this route and planning to cook during your stay. 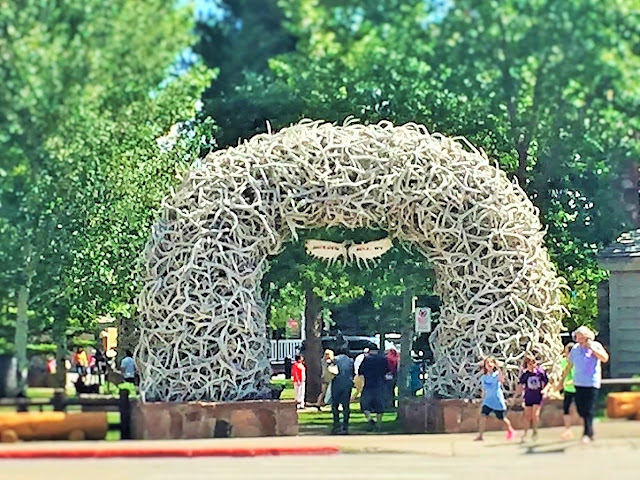 About 10 minutes later, we entered the National Park. As soon as we entered the Park, the sight of the Grand Tetons hit me. It is difficult to describe what I felt. They are not the tallest nor the oldest mountain ranges that I have seen. They were neither completely filled with snow nor with trees or flowers. If you ask me why I was in awe, I cannot give you a reason. As it happens in life, sometimes you just fall in love, not because someone you met is highly qualified or talented or looks like a model. Something just tells you they are special. And you smile.

Our first stop in the Grand Teton National Park was at the Jenny Lake. Lakes set amidst mountains and green tall trees are always beautiful, so was Jenny lake. The water was cool and refreshing. The lake vast and calm, and picture perfect.


After spending some relaxing moments at the picture perfect lake, we drove to the summit of the signal mountain to get sweeping views of the valley and the Grand Tetons. The bugs had a feast that evening while we enjoyed the views.


It was time for dinner and we debated whether to drive back to the happening Jackson town square or to dine at the Grand Teton lodge. We decided to go to the lodge and it turned out to be the best decision of the day. Because it was on the deck of this restaurant that I witnessed the most spectacular sunset of my life. We had no clue what we were about to experience when we sat down for dinner inside the restaurant. We were just lucky that the restaurant is situated on the lake, next to the marina, and is facing the Grand Tetons. I spent quite a bit of time sitting on the launching pad of the marina admiring the Grand Tetons and swaying with the flow of the water, before I went in to join the rest of the group inside the restaurant. As I was settling in, I saw a pink streak in the sky. It started expanding and I ran to the deck along with a few others. In a few minutes, I saw the Grand Tetons glow as the whole sky turned pink. The lake reflected the pink hues, enhancing the beauty manifold. The sun set behind the Grand Tetons while bathing them in its evening glow. It was a sight to behold. As they say, best things in life happen when you least expect them. We went to the summit to witness the sunset but the clouds and bugs came in the way. We called it a day and decided to have dinner when Nature decided to blow us away. Like it did 4 years ago with the best double rainbow while we were leaving Yellowstone National Park.

The drive was beautiful, the sunset spectacular and I thought the day couldn't get any better, but little did I know there is more in store. After our dinner, which was decent by the way, we drove to our Airbnb rental in Victor, which was about an hour from the Park. As we reached our rental, it was pitch dark. I looked up in the sky and could clearly see the Milky Way. The rental was beyond our expectations with a beautiful deck which was perfect for stargazing and sweet dreaming. I have seen Milky Ways before, but it was the first time I slept under one. As I laid down on the deck alone under the Milky Way, I counted myself amongst the very lucky ones on this Planet. It was a day to remember and a night I would not forget.

I have spent the least amount of time in the Grand Teton National Park compared to any other, but we made a connection that day. Being a meticulous planner, I spend a lot of time planning our vacations to make them beautiful and memorable, but I could have never crafted a day like this. Or like this and this. They just happen leaving you grateful and reminding you that "Life is what happens to you while you are busy making other plans". Sit back and enjoy!
Labels: National Parks