It has 5 islands out of which Santa Cruz Island is the largest and is the easiest island to get to. It is about an hour boat ride from Ventura through Island Packers Cruises. So, we packed our lunches and decided to make a day-trip out of it. The round-trip boat ride cost us ~$60 per person and what a fun ride it was! 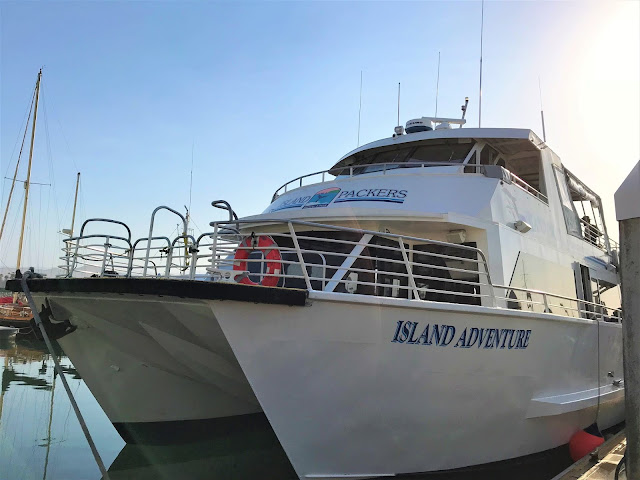 The boat wasn't too big which meant it was a roller coaster ride all the way through till we got to the island. I am prone to sea-sickness but on this particular ride I did not and I can't tell you why. We were out in the front deck the whole time and had so much fun on this boat ride that we wished it lasted a little longer.

We landed on the Santa Cruz Island to the news from the rangers that a couple of hikers almost died the previous day due to the heat and had to be flown out. Not a great welcome message but we decided to go ahead with our planned 5-mile potato harbor hike. The first 15 minutes of the hike were great with sweeping ocean views all around us. Soon enough, we started to feel the heat in what felt like a barren land, with no tree or shade in sight. The weather map showed around 80F when we were planning the trip, it seemed more like 90F when we were actually there. After giving up any hopes of finding a single tree, we settled down on a bluff for lunch. The sun was unrelenting, and we resumed our hike shortly afterwards.


We reached Potato Harbor around noon and it was indeed a beautiful spot. I could easily sit there for a couple of hours but we had to catch our boat at 4 pm, so we moved on. And on our way back, we got lost. The trails aren't well-marked and the map that was provided wasn't accurate either. After spending an hour going in the wrong direction, we corrected course and reached the campground around 2 pm. What a relief! The campground actually had a few trees!! We settled under one of those and would have easily dozed off, but we can't miss our boat as the island doesn't have any facilities such as hotels or restaurants etc. and we were not carrying tents either.


Completely sun-burnt and tired from all the walking in the sun, we sat inside the boat and began to doze off. Just then, our friend came running inside and asked us to join them on the deck immediately. We ran to witness what seemed like 'the greatest show on earth'. There were about a hundred dolphins jumping out of the ocean in synchronous groups in several directions. It was one of those jaw-dropping moments. It went on for the next 15 minutes while we were screaming with excitement unsure of where to look and what to expect. It simply made the whole trip worthwhile and reminded us of how beautiful and unpredictable Nature really is!

We all agreed that the hike would have been more enjoyable on a pleasant day and it might have been more fun to go on a sea kayak tour (it is expensive, though, ranging from $109-$229 per person).  As for us, the dolphins made our day :)
Labels: California Hiking National Parks