We absolutely love National Parks in the US and believe they are one of the greatest treasures this country has. We love hiking through them, exploring them for wildlife, and stopping randomly at places to admire their beauty and serenity. If we get a chance to visit a National Park, we wouldn't miss it. However, on our 9th Anniversary trip to Alaska, we were double-minded about visiting the state's most famous Denali National Park. Read on to know more.

In Denali National Park, you are not allowed to drive in your private vehicle beyond 15 miles into the Park. The Denali Park Road, which is the only road in the Park, is 92 miles long and you have to take a bus tour to explore the Park beyond the 15-mile mark. Bus tours are typically 8 hours long if you plan to go till Eielson Visitor Center which is at Mile 66, 11 hours long if you plan to go till Wonder Lake which is at Mile 85 and even longer if you plan to go all the way till Kantishna at Mile 89. Sitting in a bus for so long didn't sound too appealing and we thought it might take away from the fun of exploring the park at your own pace. However, it turned out that getting onto a bus was the best idea for this Park. It was not only an environmental friendly option that resulted in less congestion in the Park (hey, no parking issues!) but also we now had a bus full of people and an experienced driver looking eagerly in all directions to spot wildlife while sitting higher than one would in a car. And the results were spectacular. While on the bus we saw 6 grizzly bears, 2 lynx, several moose, caribou and Dall sheep. Each time someone on the bus spotted an animal, they would let out a squeal, the bus would stop, everyone is glued to their windows and would soon enough start clicking their cameras. This would happen almost every 30 minutes keeping the road trip pretty active. 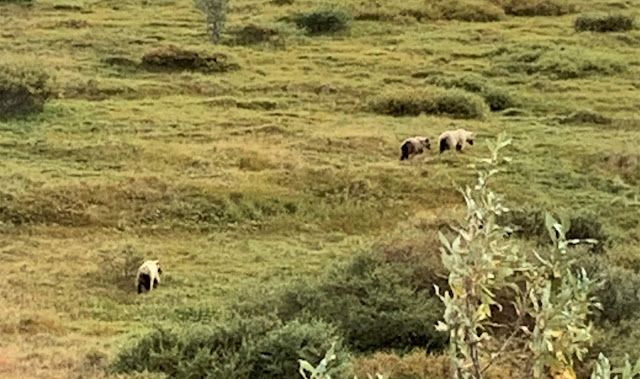 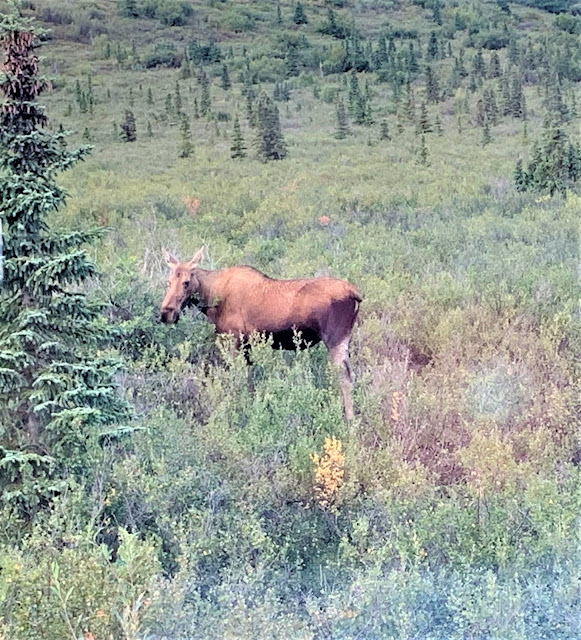 We boarded the 7:15 am Wonder Lake transit bus (green bus) with food, snacks and water in our backpacks as there is no food sold in the Park except at the Park Visitor Center and it was going to be a long day.  There were several brief (10-15 minute) rest stops on the way and there were 2 major stops. One was at Eielson Visitor Center (40 minute stop on each way), which had the most spectacular views in the entire Park, and the other one was at Wonder Lake (20-25 minutes) which was the last stop on our tour before we turned back. 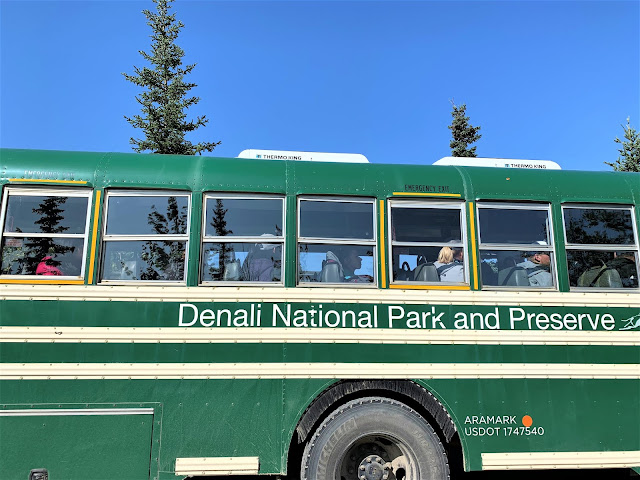 As we were nearing the Eielson Visitor Center, we were treated with a glorious view of the namesake Mount Denali.  What a grand view it was! Everyone in the bus squealed with joy. Mount Denali was majestic. And beautiful.  It made its presence felt even from a distance. Yet our bus driver said she hasn't seen it in the last 10 days. And that we were so lucky to have such a good weather and view as the mountain is typically shrouded by clouds. The day started off cold and cloudy but the skies opened up and the sun shone as we approached the Eielson Center and we were indeed lucky that we were treated with a spectacular view of Mount Denali for the next few hours. 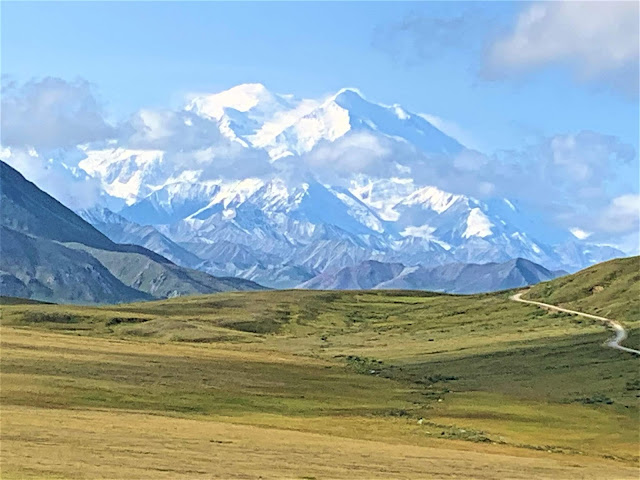 At the Eielson Center, the bus stopped for about 40 minutes which allowed us to stroll around the beautiful area. This is our favorite stop on the bus tour. There were snow covered mountains, green rolling hills, valleys and streams on one side and Mount Denali on the other. The scenery was gorgeous everywhere you look. We were so glad we made the trip to Denali National Park. 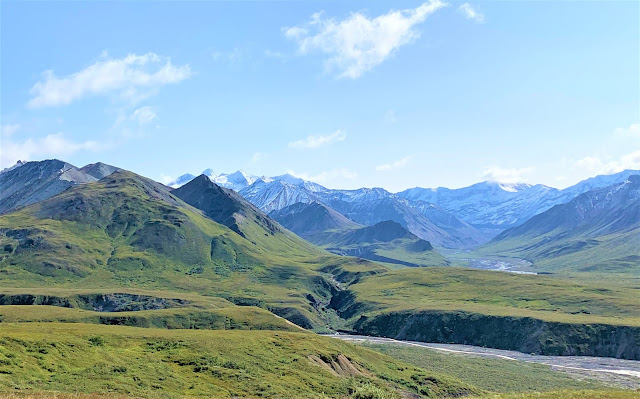 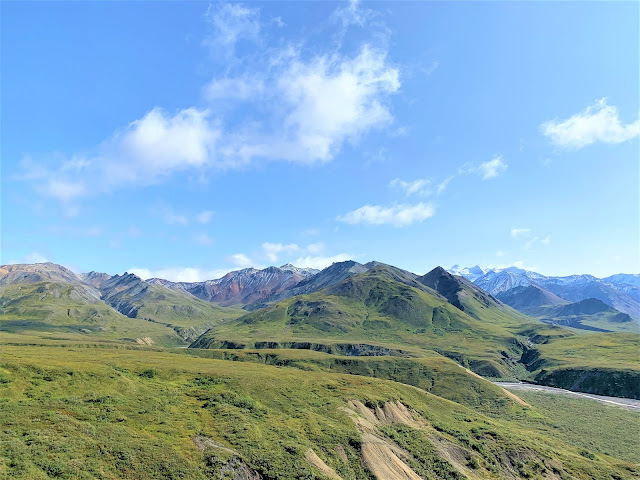 Our next major stop was at the Wonder Lake where we had good views of Mount Denali as well. After spending about 20 minutes here, we got on our bus to start our journey back. We debated if we should hike in this area and take another bus a couple of hours later. But the buses were full, we weren't sure how long we would have to wait for another bus with available seats and it was still cold. So, we decided to stick to our bus and were happy when they made another 30 minute stop at Eielson Center. This time, a ranger showed us a family of 7 grizzly bears playing a couple of miles away through a binoculars. It was just a lucky day! 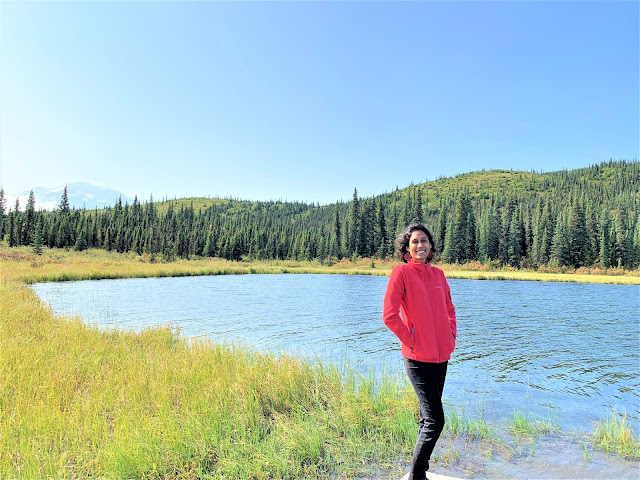 We saw a couple of caribou on our way back and by the time it was 4 pm, we could see the enthusiasm in the bus slowly waning down. People weren't as glued to their windows as they were in the morning. We started chatting with another couple behind us and the bus reached the Park Visitor Center around 6:15 pm. We headed home and my husband made the best aloo tikki (a popular Indian street food snack made with potato) I had in a long time. We agreed that we would make aloo tikki a monthly tradition at our house :) 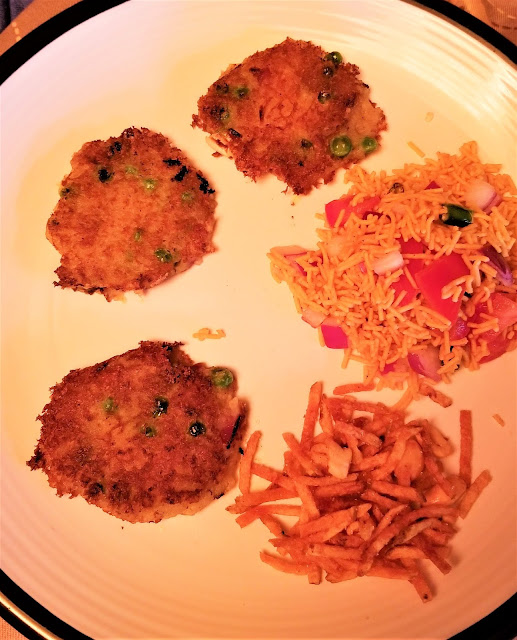 Next morning, we decided to explore the first 15 miles of the Park at a leisurely pace and do a couple of hikes. We started with Mt. Healy Overlook Trail from Denali Visitor center which was about 5.2 miles round-trip. The trail goes through a spruce forest and travels up Mount Healy and gives a good overview of the area. We saw a ton of mushrooms along the way in various sizes, shapes and colors. 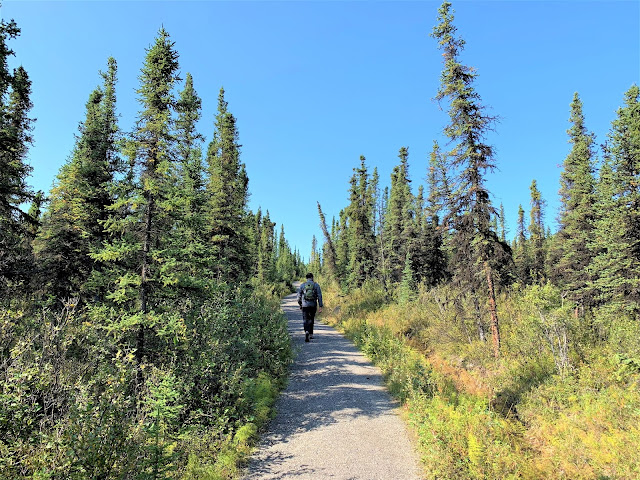 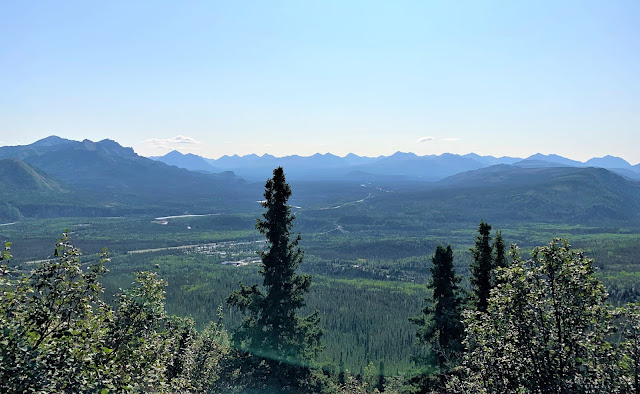 We then took the free shuttle to sled dog demonstrations in the Park which are given three times daily in peak season at 10 am, 2 pm and 4 pm. These 30 minute programs include an opportunity to tour the kennels, meet the Alaskan Huskies and see a few of them in action. We did not know what to expect but were pleasantly surprised to see how much these dogs loved running and how fast they can run. The thing that struck us the most was how all the other dogs would howl and cheer for the 4 dogs that were running that day for the demo. We definitely learned a thing or two about dog sledding in Alaska and came out quite impressed. 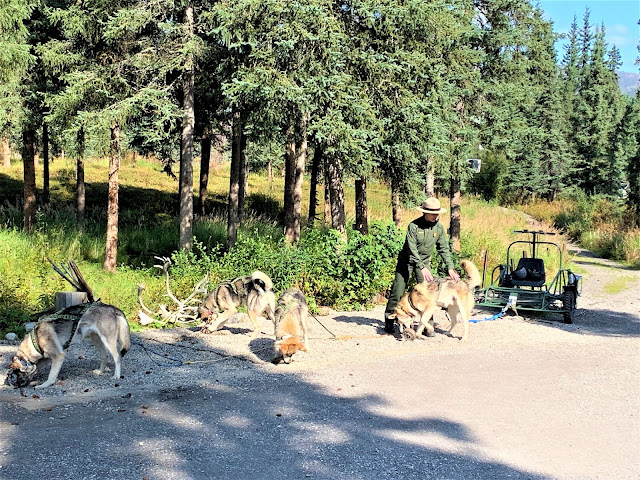 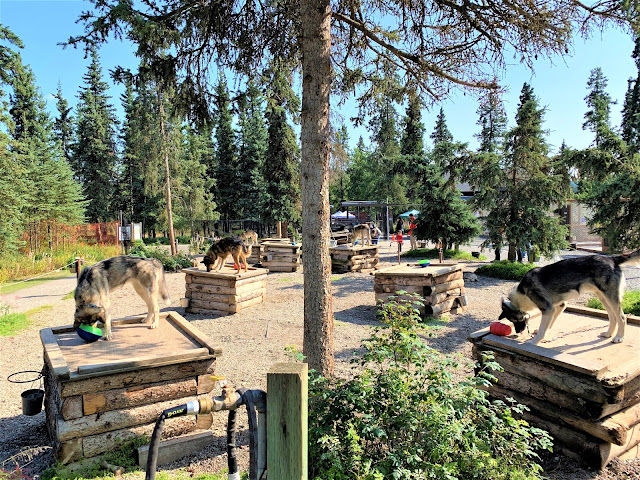 We then did the Savage River Trail which is at the 15-mile mark. Yes, we had to go till the last point they would permit us in our car :) And I am so glad we did. This trail is located in a valley, along the Savage River, sandwiched between mountains covered in greenery. It was a sunny afternoon and the location was picture perfect. It was just a 2 mile round trip trail but I enjoyed every minute of it. One mile into the trail, we crossed a bridge and settled on a huge rock to take it all in. The scenery was a feast to the eyes while the river flow was like music to the ears. It was one of those moments when you know you are in the right place at the right time. My heart was filled with joy and I wished this moment would last longer. I made a sincere wish to come back to Denali National Park again! 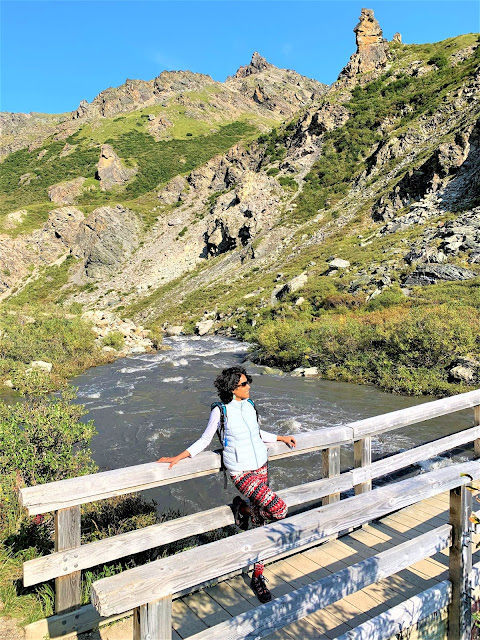 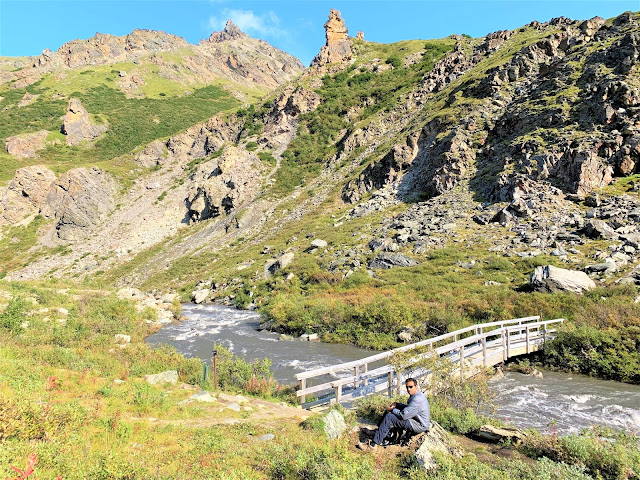 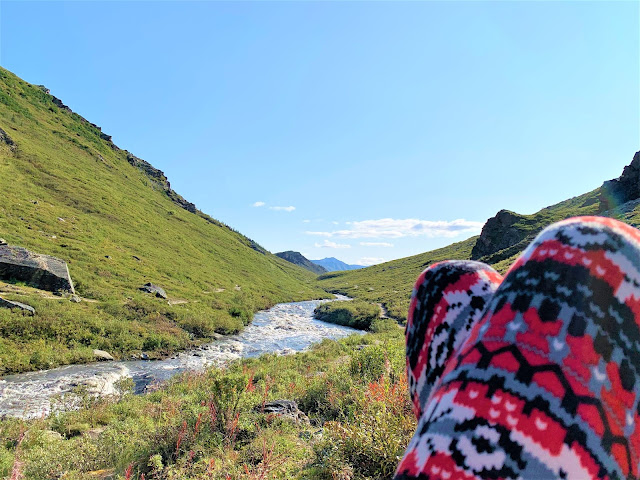 We then did the short 0.7 mile Mountain Vista Trail at Mile 13. There was nobody on the trail except for a black bear on a hill at a distance. The words 'Last Frontier' came to mind as we looked at the serene landscape around us. We stood by the stream silently for a few minutes, stared at the majestic mountains around us, counted our blessings and headed home. 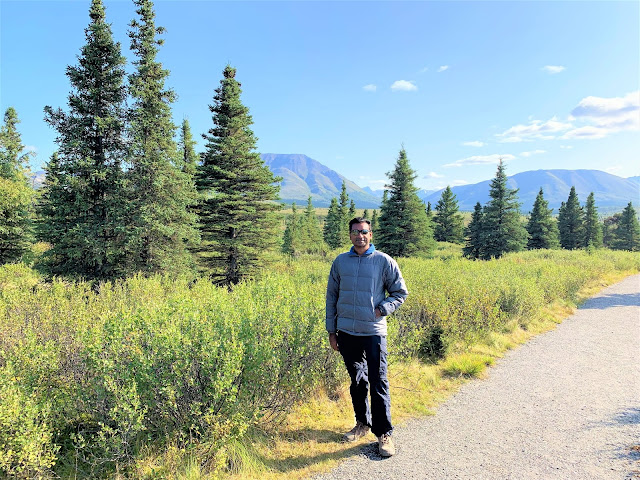 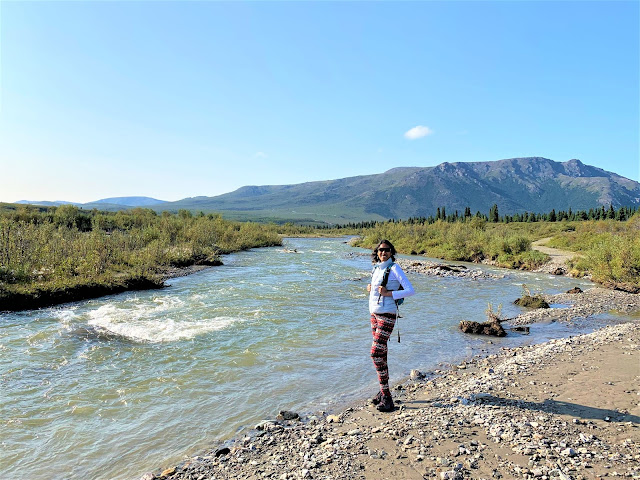 I had to share this picture of a mushroom on the trail, which looked like a chocolate donut. 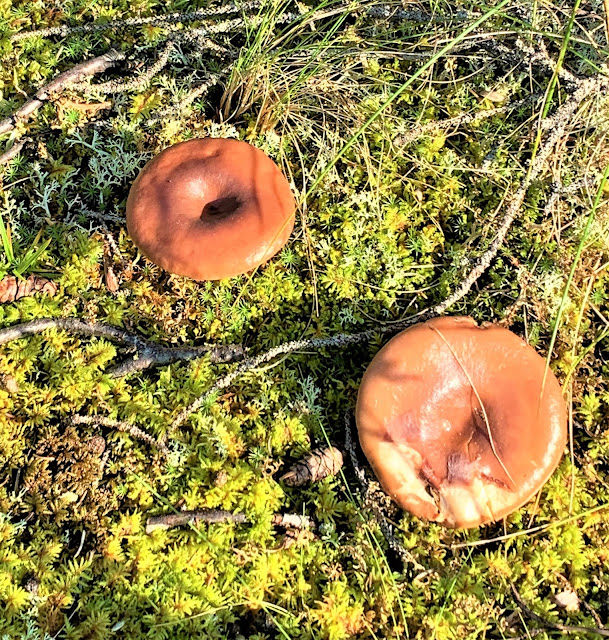 Next morning, we were treated to this beautiful sunrise view from the balcony of our cabin. This view is exactly what I had in mind when I booked this cabin and hoped it would be worth all the trips to the outdoor compost toilet and an outdoor shower. I am not sure if it was worth it or not but taking a shower with a bucket and a mug in an outdoor tent without a place to keep your clothes in 40F weather was definitely an experience! 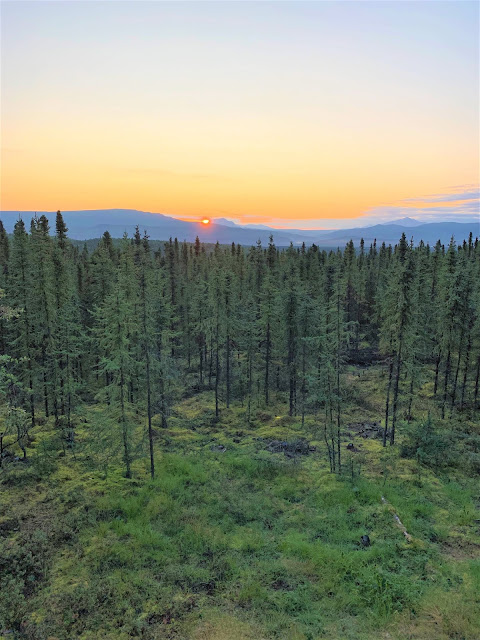 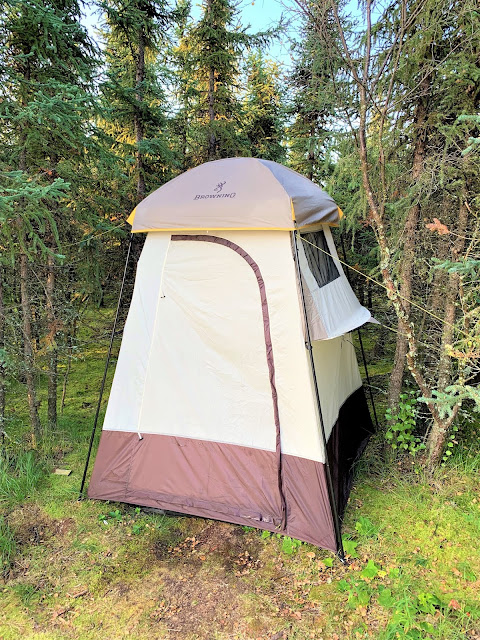 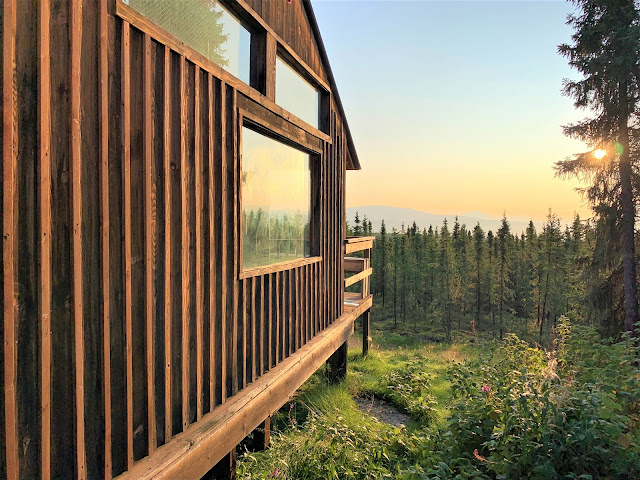 Our trip to Denali National Park was made memorable by the beautiful weather in the Park for those 2 days. I can imagine why it wouldn't be so much fun visiting on a cloudy or a rainy day when you can't see the mountain or wildlife and are stuck in a bus for 12+ hours. But if you ask me, I would take a chance again and sit on that bus. Would you?

P.S: Though you would be spending most of the time in the bus, I would recommend wearing extra layers as several people would leave their windows open to take pictures and there would be super cold air blowing on you most of the time, even in August.
Labels: Hiking National Parks Wildlife