We celebrated our 12th anniversary in what had been my dream destination for a long time - Iceland! We spent 10 days driving along the Ring Road in a campervan, exploring the various unique landscapes of Iceland and staying in some amazing campgrounds across the country. For our itinerary of the first 5 days of the trip and my husband's birthday celebrations, click here. This post is about our next 5 days and our anniversary celebrations. 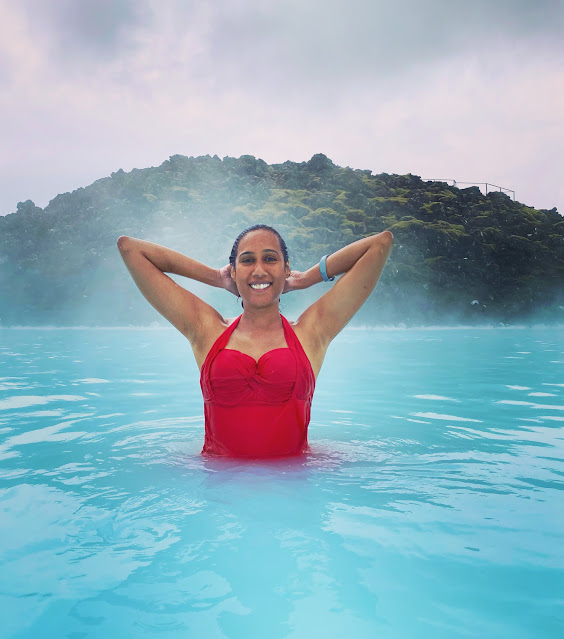 We reached the tiny fishing town of Siglufjörður the night before and settled in the campground that is in the outskirts. Set in a lush green valley surrounded by snow capped mountains on one side and ocean on the other, this lovely campground offered a very secluded yet a warm and fuzzy feel. The town itself is pretty and we spent an entire day here, lost in the beauty of the mountains while bathing in delicious sunshine. We found a homely coffee shop in town, which my husband loved. We sauntered in the town and then I settled down next to the harbor, listening to music and staring at the beautiful lush green snow capped mountains in front of me. Such a lovely picture perfect setting - the kind you would dream about and/or read about in romantic novels!  It is one of those days when you are having such a good time just doing nothing! Simply basking in delicious sunshine, listening to my favorite music, reminiscing my favorite moments, while sitting in one of the most scenic spots in a country known for its scenic beauty - what a bliss! 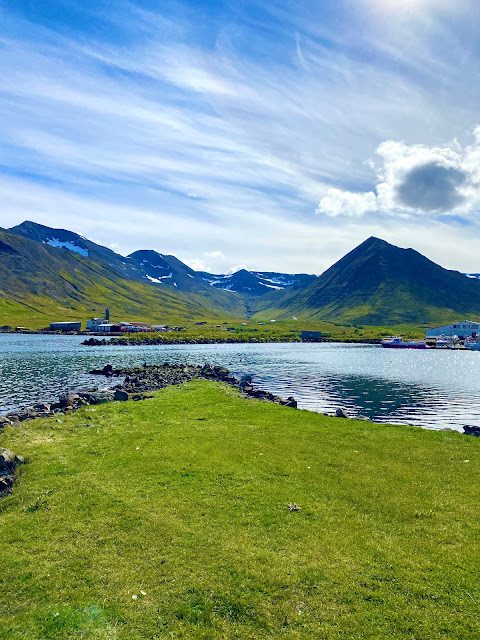 This was the only day during our 10 day trip in the Icelandic summer, where the weather was warm enough to pull this jumper off :) 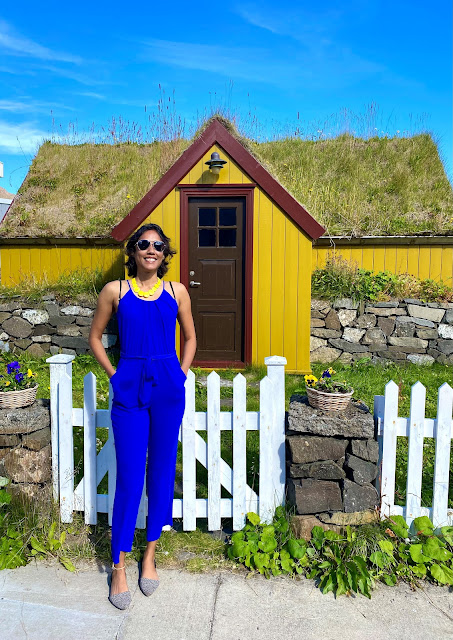 We probably could have spent the entire day admiring the stunning beauty of this place, but we have a long drive (5+ hours) in front of us to reach our next destination, Olafsvik Campground. So we pulled ourselves away from here and began our onward journey. We stopped in another fishing town, Stykkishólmur, and had their famous 'Fish & Chips' from a food truck by the harbor and reached the campground late at night.

It was pouring when we woke up the next morning. It was super cold and foggy and it pretty much remained that way the entire day. We were glad our campground had an indoor kitchen and dining room, where we could spend some time in the morning and make breakfast. We then drove several miles in search of a good coffee shop. We found one next to Hellnar Arch, which had a lovely outdoor seating but we had to squeeze indoors due to the freezing cold. We had coffee and Skyr cake here, which my husband loved. 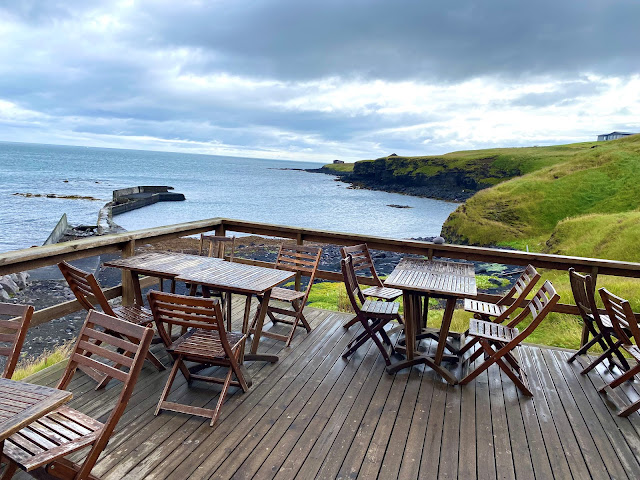 Hellnar Arch is a naturally formed stone arch on the beach of Snaefellsnes Peninsula. The arch is surrounded by rugged rock formations and the waves have shaped these volcanic cliffs into intriguing patterns. 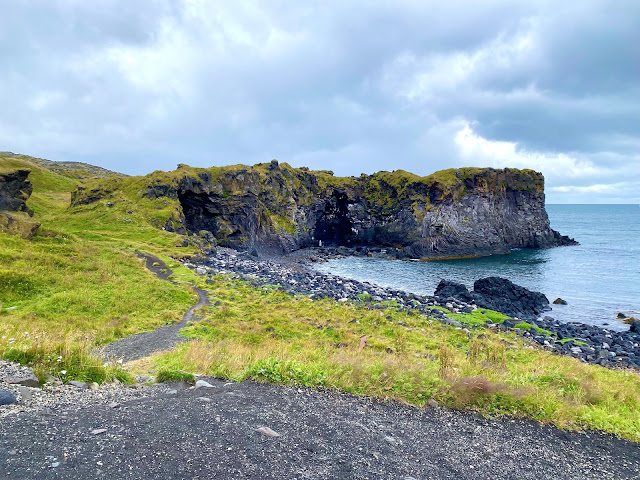 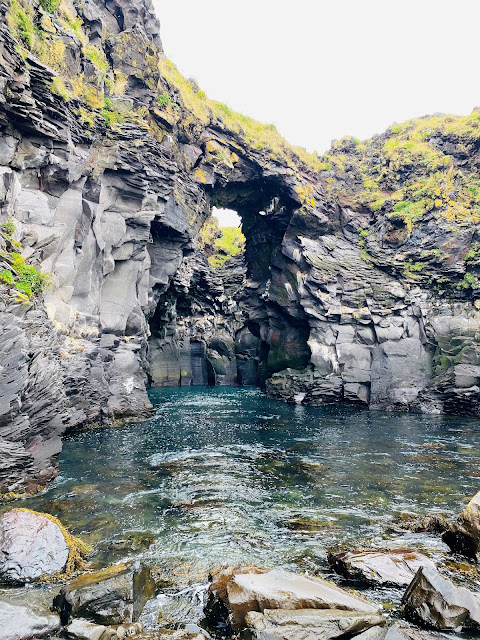 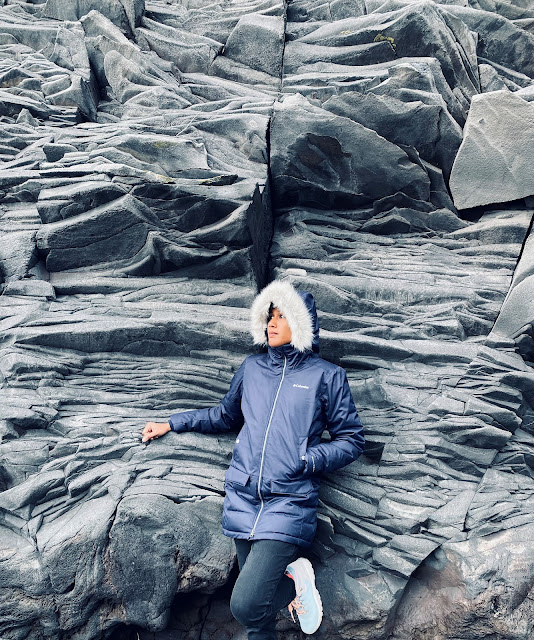 I wanted to do the coastal hike from Hellnar Arch to Arnarstapi, which seemed pretty. But my husband wasn't feeling well, so we turned back after a while. 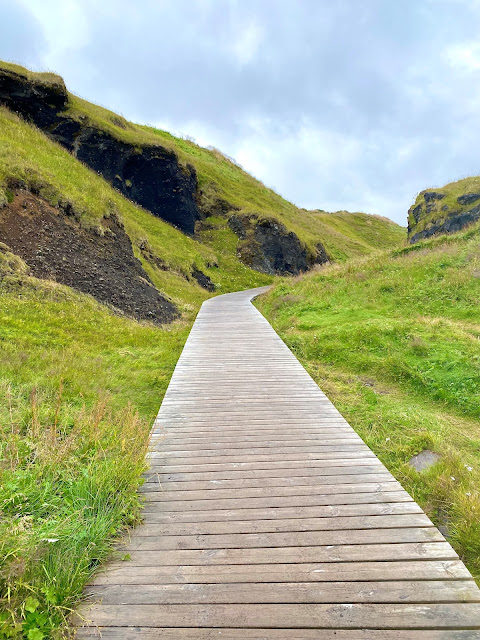 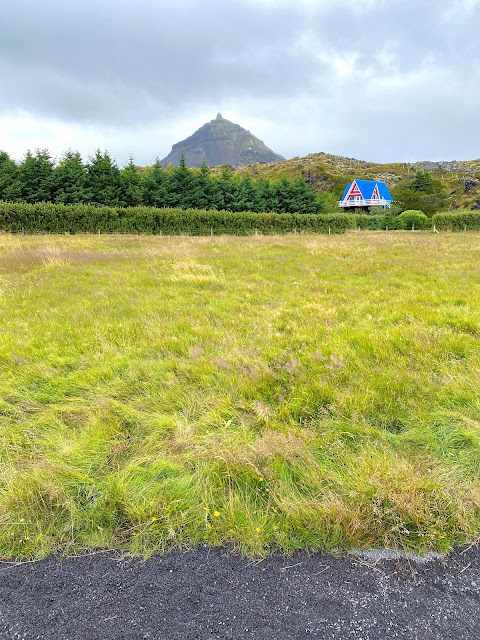 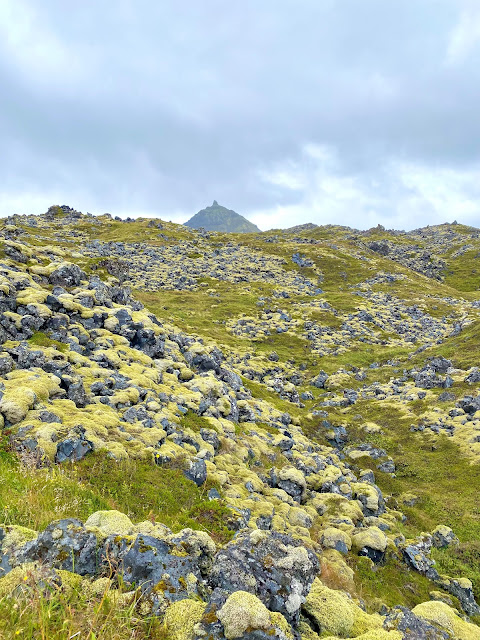 We then headed to Snæfellsjökull National Park and briefly stopped at Arnarstapi on the way. One of the key attractions in this area is the Snæfellsjökull, which is a glacier-capped volcano found on the tip of the Snæfellsnes Peninsula in west Iceland. It was quite foggy and the visibility dropped further as we drove uphill.  Through the fog, and maybe because of it, the moss-filled volcanic landscape felt other-worldly - as if we briefly stepped into paradise! But when our GPS said we arrived at the glacier, all we could see was thick clouds and fog. We could be standing on the glacier itself, and we wouldn't have known. It was very windy too, but I braved outside the car, cutting through the fog, trying to locate the massive glacier :) The fog cleared for a few seconds and I managed to see a tiny bit of it but my husband thought he had lost me by then, so I came running back to assure him that I was still alive and thriving :) I could tell it's a beautiful area that we would have quite enjoyed on a clear day but on that day, we had to run quickly towards safety. 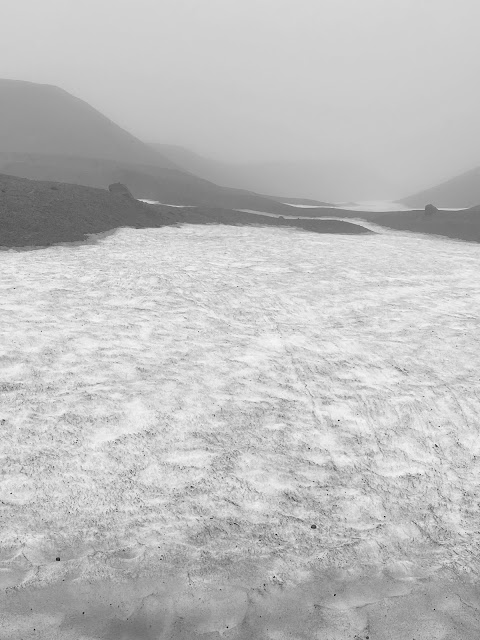 Our next stop was at Kirkjufellsfoss - which is a photographic hotspot with views of a waterfall & distinctly shaped iconic mountain called Mt. Kirkjufell. 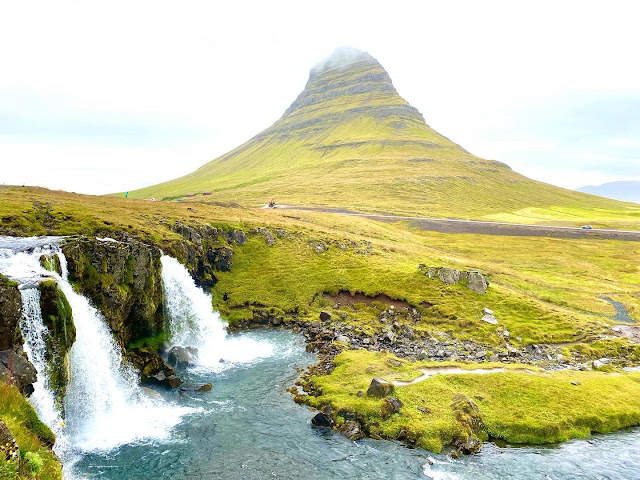 We then headed back to Reykjavik to grab some dinner and get ready to join the annual cultural festival of Iceland the next day.
Day 8:
This day was all about experiencing the festive atmosphere in downtown Reykjavik and getting to know how Icelanders celebrate. Culture Night or “Menningarnott” is an annual one-day festival in Reykjavik, generally held on a Saturday in late August, around Aug. 18-22. When I got to know this in early August, I modified our itinerary to be able to spend this day in Reykjavik and I am glad I didn't miss it. 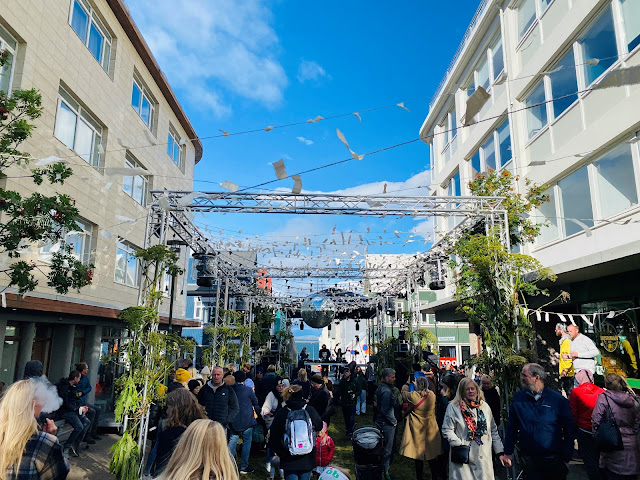 The festival features dance, design, music, art, concerts, games, pop-up shops, and all sorts of interactive activities around town including Reykjavik Marathon. Galleries and museums are open, and there’s free entry to everything. After some gymnastics around trying to find parking, we learned from the traffic cops that we could park at a nearby University for free that day. It was quite cold that day, so we decked up in our jackets and made our way to the downtown. 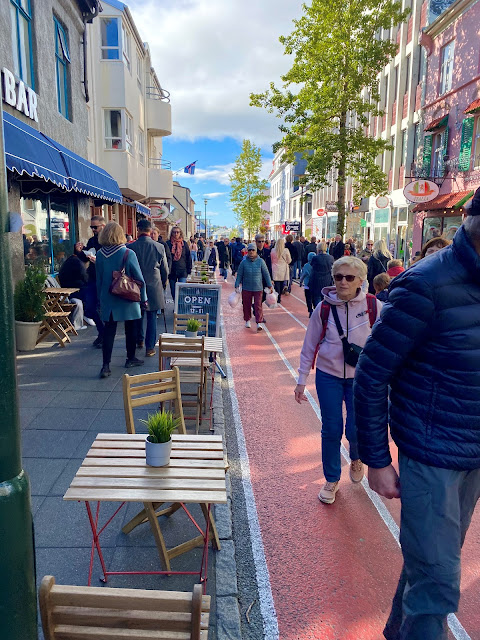 We reached around noon and as we strolled around downtown, we saw music bands and stages just setting up. We entered an art gallery and enjoyed some delicious snacks they offered, more than the art itself, I must admit. We have never seen so many people in Iceland in all the 7 days prior combined, as we saw in downtown that day, most of them in their fashionable winter coats. We walked all around downtown and I had fun dancing to the music on the streets at various intersections, my favorite being the one where I danced with a Brazilian lady to Latino music. I went to a bookstore and learned about Halldor Laxness (an Icelandic writer and winner of the 1955 Nobel Prize in Literature), went to a tiny art studio and learned about some of the Icelandic myths and finally settled down in a cozy coffee shop 'Cafe Babalu', not only because my friend recommended it, but also because it looked so cute and colorful. 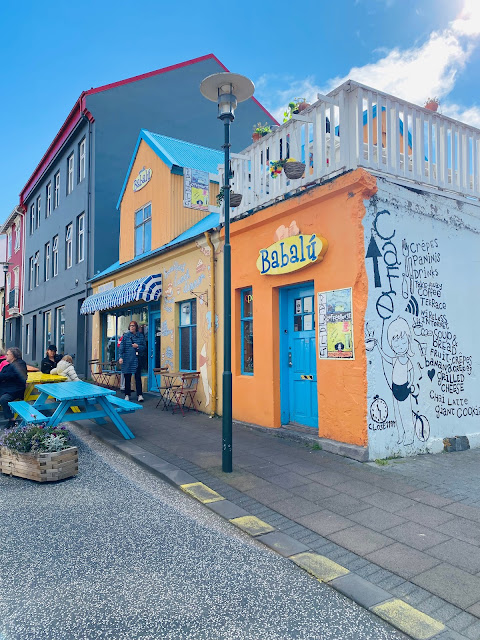 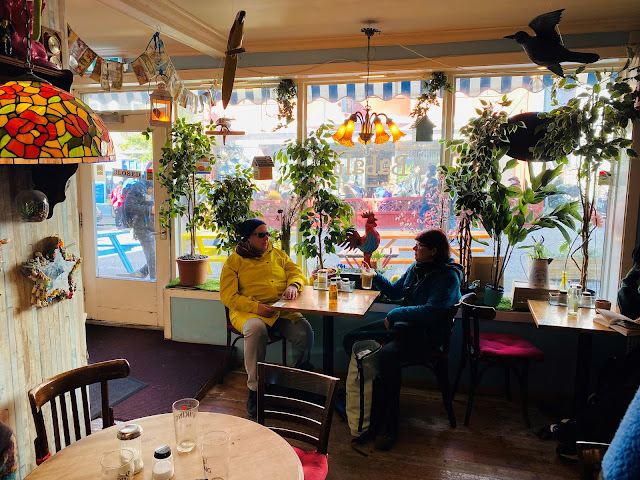 Our campground is a long drive away, so we opted to head out instead of waiting for the fireworks at 9 pm.
Day 9:
This day was reserved for the "Golden Circle", which is the tourist route covered by most people visiting Iceland. The three primary stops on the route are the Þingvellir National Park, the Gullfoss waterfall, and the geothermal area in Haukadalur, which contains the geysers Geysir and Strokkur. Each of the stops has its own significance but my favorite was the majestic and powerful 'Gullfoss' waterfalls. 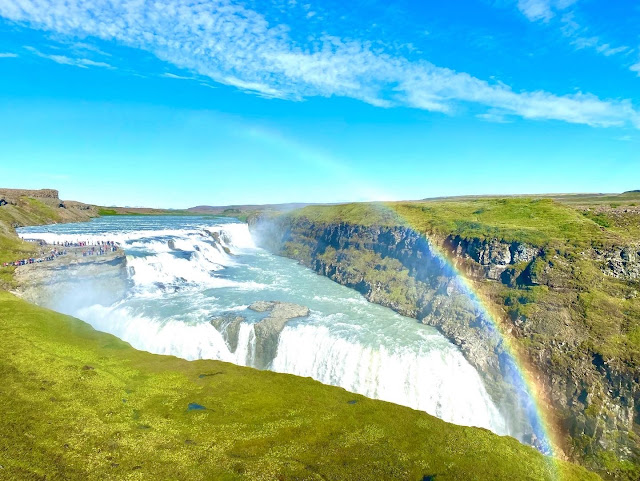 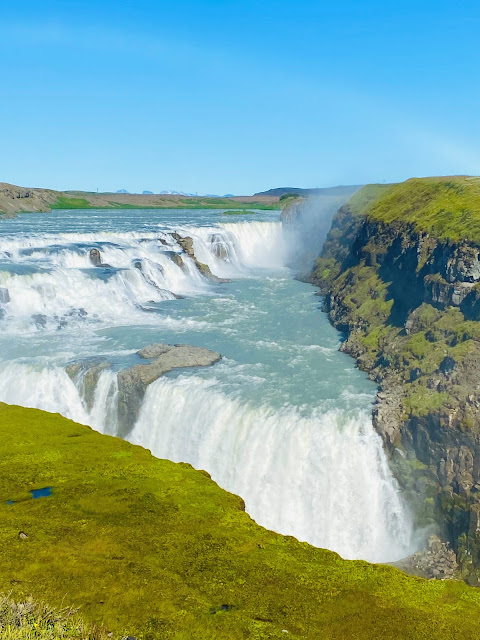 Iceland sits on the Eurasian and North American tectonic plates and you can see them at Þingvellir National Park. You can also go snorkeling in Silfra between the tectonic plates. We did not go snorkeling and didn't spend a lot of time here either. The geothermal area in Haukadalur is nice but we have seen amazing geysirs at Yellowstone National Park in the US before, so we didn't spend a lot of time here either. Apart from visiting the Gullfoss waterfalls, the highlight of the day for us was visiting Fridheimar - which is a greenhouse farm powered by geothermal energy, that grows tomatoes all year round with an in-house restaurant with tomatoes being the theme of their cuisine. A restaurant visit has rarely been this exciting and you can read more about it here. 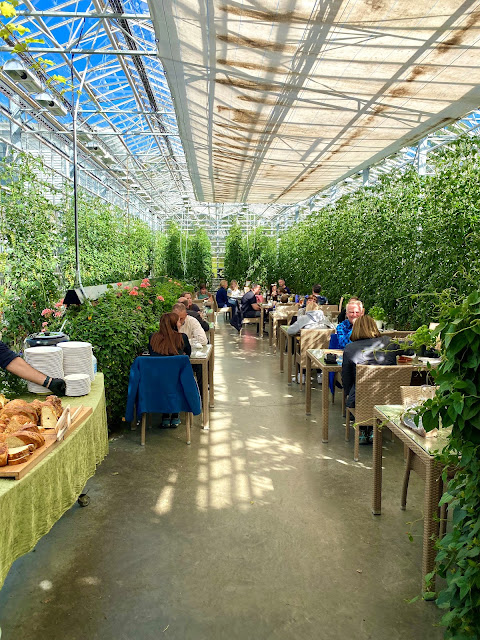 We then made a quick stop at Lake Kerid, which is a volcanic crater lake. I could see the contrasting colors would have made it eye-catching on a bright sunny day but it was cold and dull on the day we visited, so we left quickly. 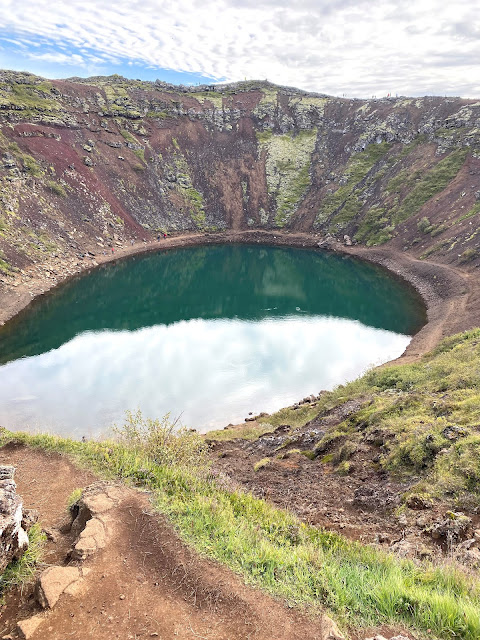 Our last stop of the day is another one of my favorite waterfalls in Iceland - Seljalandsfoss. We briefly stopped here on Day 1, but didn't go behind the waterfall, hoping to come back the next day. We didn't get a chance to do that on Day 2, but I could not leave Iceland without experiencing that.  So we made the long drive to go back there. It added 2+ hours to our journey that day, but then - How often do you get the opportunity of feeling the mist and hearing the thunder of a waterfall from behind it! 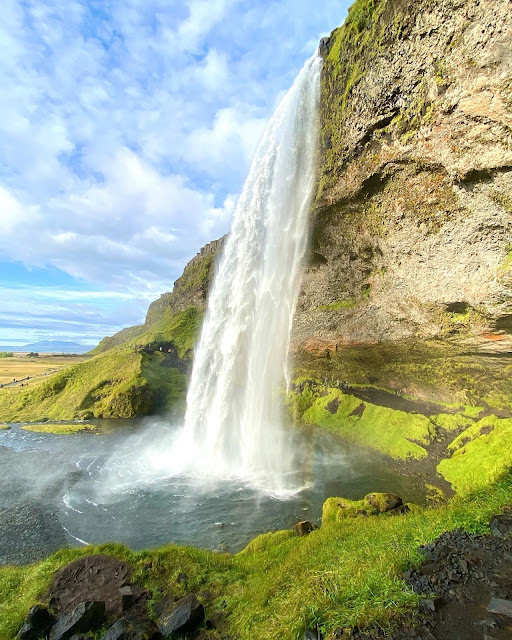 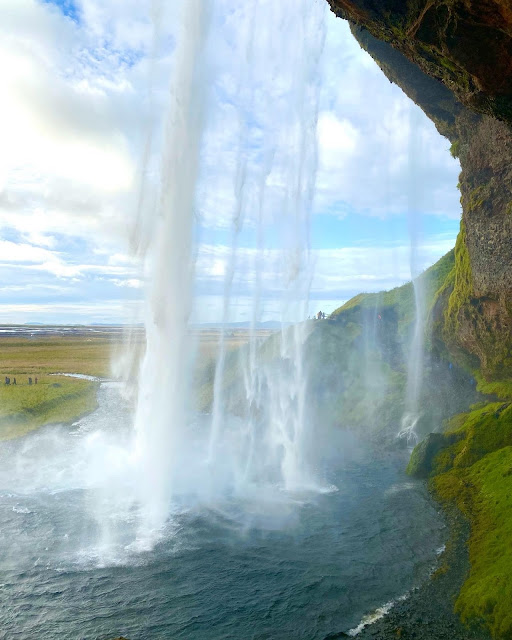 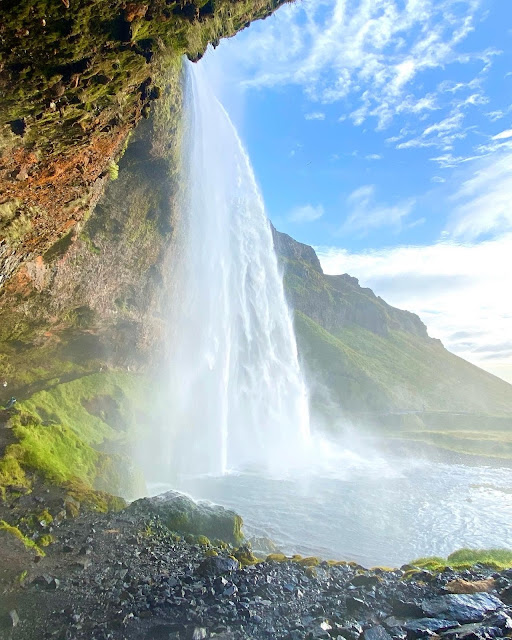 The waterfall may not be as powerful as the others we have seen in Iceland, but it is pretty, accessible and offers a unique perspective, which made it a very enjoyable visit. 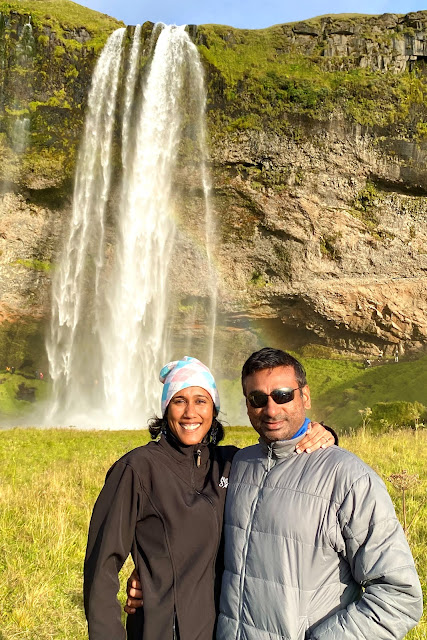 We then drove to our last campground, Grindavik, which was crowded but we managed to find some space to squeeze our campervan in. They also had a strict cut-off time for using the kitchen and dining area at night, but we decided to stay here as it was quite close to our next destination which we were excited about - Blue Lagoon.
Day 10:
Day 10 is our wedding anniversary and I made a reservation at the Blue Lagoon geothermal spa from 8 am - 11 am and a lunch reservation at its onsite restaurant, 'Lava Restaurant' at 11:30 am. 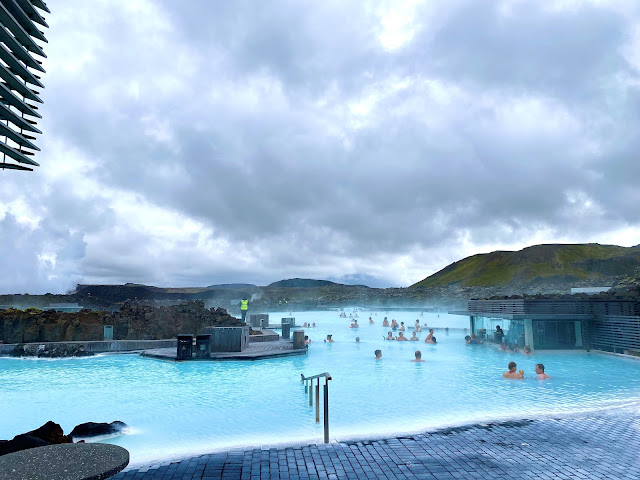 Our experience at Blue Lagoon was as fantastic as they said it would be! Spending 3 hours in the perfectly warm geothermal water, that is in a shade of blue that can only be described as heavenly, amidst that hot steam in the cold Iceland weather was the perfect way to celebrate our anniversary! The geothermal seawater rich in minerals, silica and microalgae drawn from 2,000 meters below the surface of the Earth, is said to have healing powers. It is truly a gift of Nature and I am so glad we got a chance to experience it. 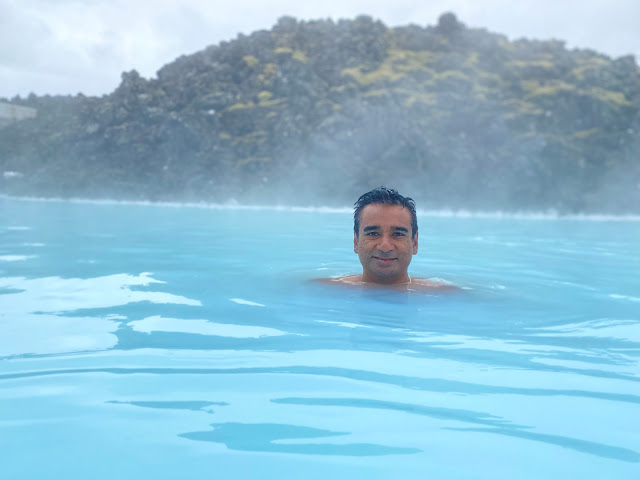 I thought 3 hours would be a long time to spend in a spa, but it was just perfect for us. We enjoyed the free face mask and the free welcome drinks and just reveled in the overall experience. The facility was very well maintained and did not feel crowded, despite its popularity, probably due to timed entries or may be because we joined the first slot (8 am) on a Monday morning. We then got ready and headed to the Lava Restaurant. It was a fancy restaurant with an elegant setting and a good view of the Blue Lagoon. 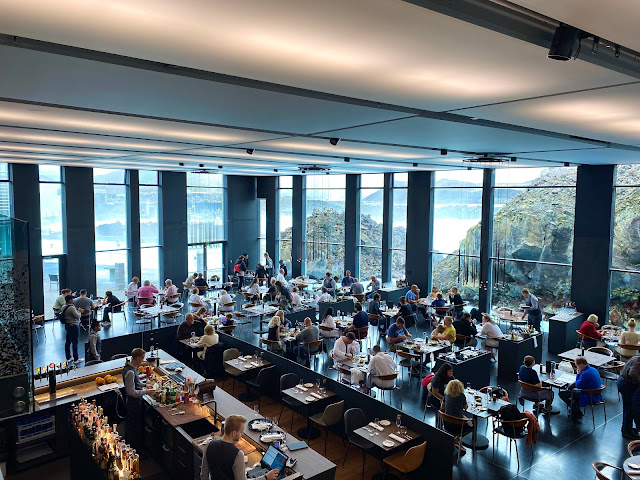 We enjoyed our lunch here and then headed to return our campervan just in time. We were then dropped at the airport to catch our return/onward flights.
What a trip it was! Weather in Iceland is quite unpredictable with some days starting with fog, followed by rain and ending in sunshine. But we were mostly lucky with weather, except the day we were in Snaefellsnes Peninsula when we couldn't see anything due to the fog. The last couple of days were very cold and my husband had cold and cough, which we later realized was due to Covid. The trip was totally worth it, even though both of us ended up with Covid from it. 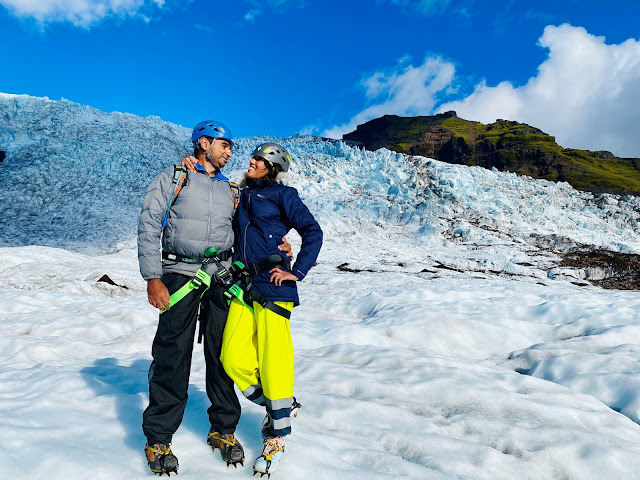 Iceland is special, because there is probably not another place in the world, where you get to see such a variety of unique landscapes in a span of 10 days. Though we have seen and experienced most of these landscapes before, it still wowed us on most days! And the food blew me away! This is my first taste of Europe and I can't wait for our next trip to this beautiful continent.
Labels: Adventure Camping National Parks Road Trip