One day in Kuala Lumpur, Malaysia

If you have only one day to spend in the capital city of Malaysia, Kuala Lumpur - home to the World's Tallest Twin Buildings - what would you do? Of course, you would go to visit them. Also known as Petronas Twin Towers, named after the state-owned gas company Petronas which inhabits Tower 1, both towers stretch 1,483 ft. into the sky connected by a sky bridge halfway up the buildings. We did that and much more when we had a one-day stop-over at Kuala Lumpur International Airport (KLIA) on our way to India (which by the way I thought was a cool and inexpensive way to explore a new country). Read on, to know what else you can do.

If you are from India residing in the US and have a valid H1-B visa, you can get visa on arrival at KLIA. A host of other countries such as US/UK/Canada/Australia do not even need a visa to enter Malaysia and stay for a short period while some of them do. For more details on that, click here. Once the visa issues are sorted out, we exchanged currency at the airport, though not the best place to do that, still convenient. We then bought round-trip tickets for the 'KLIA Ekspres' which is an express train that takes you from KLIA to the city (KL Sentral) in 28 minutes flat. We found this to be the best and fastest way to get into the city from airport. KL Sentral is the main railway station in Kuala Lumpur and is well connected to most of the places in and around the city. Once at KL Sentral, we made use of the self-storage lockers and put our luggage in there. It would have been a really bad idea to try and drag our luggage through the local trains and around the city.

From KL Sentral, we took the 'Kelana Jaya Line' to reach KL City Center (KLCC) where Petronas Twin towers are located. The train station is very close to the towers and the KLCC shopping complex. The towers were impressive tall structures but we were not motivated enough to take the tour, so we started walking around after taking few pictures. If you are interested to take the tour, it is advisable to buy tickets in advance to avoid long queues and get the tour time you want.

After walking a bit, we found out that Chinatown isn't too far away, so we took a train at the next station and reached 'Masjid Jamek Station' and walked to 'Petaling Street' which is the name of the Chinatown in KL. Its busy streets lined up with small shops selling a variety of items, food and touristy stuff reminded me very much of Indian markets in small towns.


We then left Chinatown and went to a nearby shopping mall to eat at their food court. The food court was very interesting with a wide variety of South East Asian dishes, most of which included seafood. It was a feast to the eyes and tummy as well. 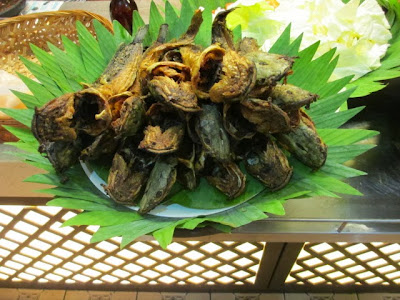 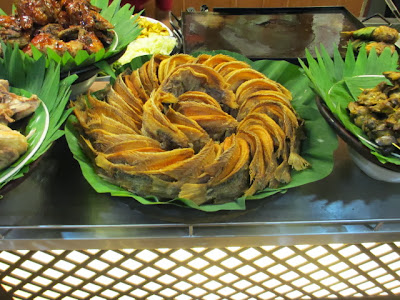 And if you are in Malaysia, shouldn't you try the Malaysian national dish? Absolutely. So we tried this delicious, super-spicy Nasi Lemak (a fragrant rice based dish sold wrapped in banana leaves). I could not help but think how close this tasted to our South Indian masala curry with rice. After all, Indians form a major ethnic group in Malaysia (along with Malays and Chinese) and represent about 20% of Malaysian population according to an article, though official statistics show it to be far less. No wonder we saw so many Indians around and it felt like another 'Hyderabad' to me, which is a South Indian capital city. The look and feel of both the cities were similar too, where the old forts and museums co-existed with the new city complexes.

We then went back to Suria KLCC, which is Malaysia's premier shopping center located at the base of the Twin towers. It was not open in the morning when we were at the Towers, so we went back to check it out. It is a bright and bustling shopping center with dancing fountains outside the complex. We bought coffee and sat outside watching tourists trying to time their photos with the high of the fountains. Boy, it was fun!

There were other interesting places to visit such as Batu Caves, but we were tired of all the walking we did and decided to call it a day. We went back to KL Sentral and took the KLIA Ekspres back to the International airport. A day well-spent in one of Asia's fastest growing cities!

Let me know what you would do with your one day in Kuala Lumpur.