Our Anniversary cruise from Alaska to Vancouver

An Alaskan cruise along the Inside Passage is a great way to blend a relaxing vacation with some stunning scenery and interesting exploration. It is also the easiest way to explore this beautiful area which doesn't have many roads connecting it to the US mainland. We took a Caribbean cruise for our 1st anniversary celebration and loved it, so we didn't need a lot of convincing to take another one. And after spending 2 long days at Denali National Park and 3 full days on a sea kayaking adventure in the Alaskan wilderness, we were ready for some rest and a bit of pampering (well, that never hurt anyone!). We got all of that and more on our 7-night cruise from Whittier, Alaska to Vancouver, Canada aboard 'Royal Princess' with Princess Cruises. We came back relaxed, rejuvenated and with some great memories of the trip. 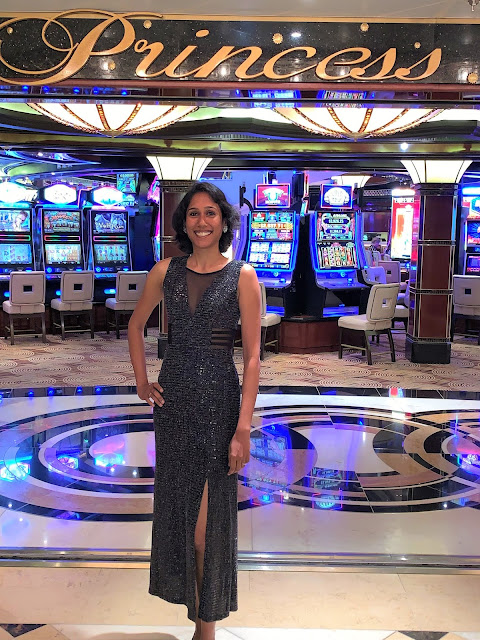 We boarded the ship around 12:30 pm and kicked off our vacation with a good lunch in their top buffet deck with huge picture windows overlooking the gulf of Alaska. 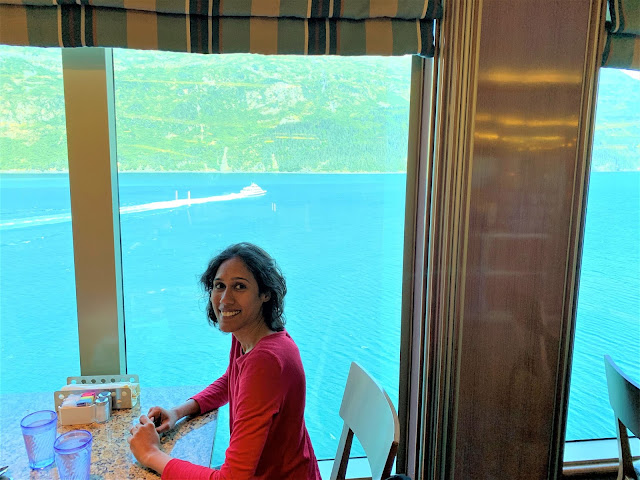 Soon after, we were taken to our room which was of decent size and even included a closet for clothes and shoes. This was a pleasant surprise for us when compared to the tiny cabin in our Royal Caribbean cruise 8 years ago. 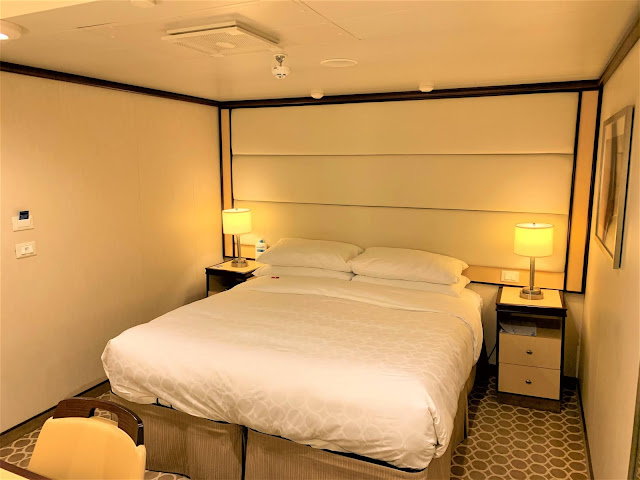 After unpacking, we explored the atrium area which has a nice dance floor, on which I spent quite a bit of my time during the cruise. There is no dearth of food and music on a cruise ship. 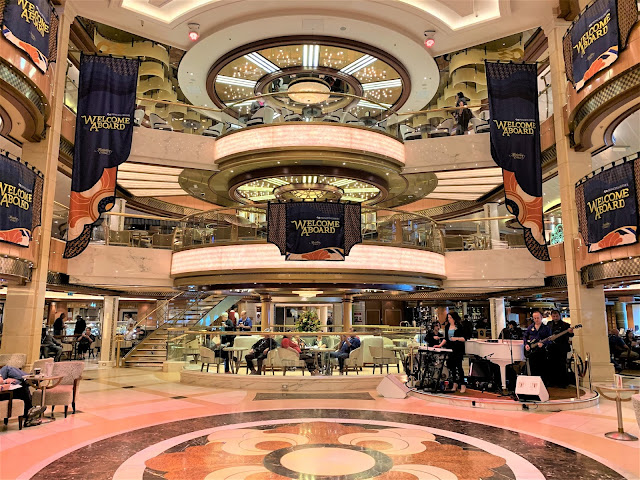 Hubbard Glacier is the largest tidewater glacier on the North American Continent. Our ship reached the glacier some time in the afternoon. We tried playing ping pong on the windy deck during the day and participated in other events while we waited.

It is a huge and active glacier, so the ship stayed at a considerable distance (about 1/2 mile) from it. It was a cold and windy day, so we spent a couple of hours on the deck to admire the beauty and majesty of the Glacier, before heading indoors. 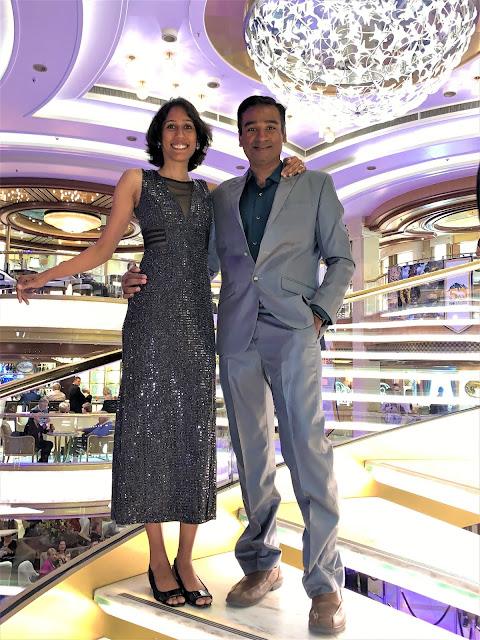 It was a formal dinner night, so we got dressed up and headed to our designated table in the dining room. I like these formal nights on the cruise, where you get to dress up, eat fancy meals in a nice setting and not worry about the cost :) 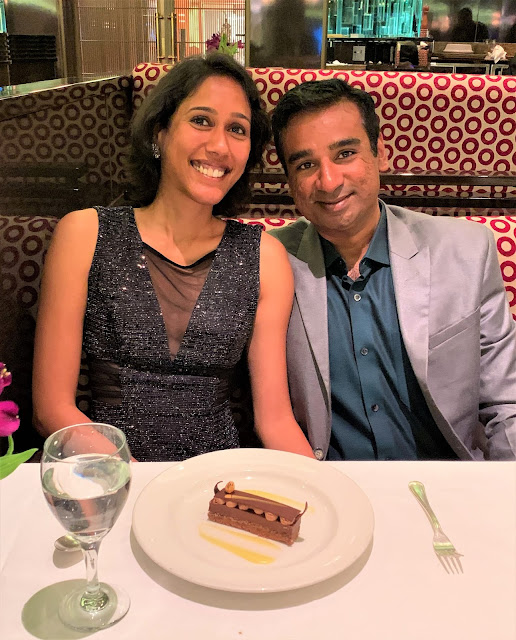 With more than 50 named tidewater glaciers, several fjords, mountains and wildlife, Glacier Bay National Park is a paradise for nature lovers. The Park is remote, has no roads and is only accessible by cruise/boat or by plane. There are tours available where they take you closer on a charter boat but we were happy to watch from the ship deck. It was another cold and windy day but we spent several hours on the deck mesmerized by the scenery around. The ship spent a lot of time near Margerie Glacier, which is a huge and active 21-mile long tidewater glacier in the Bay, and near John Hopkins glacier, which is a 12-mile long glacier with an interesting ice pool before it. The ship did a 360 degree turn in the Bay so everyone has a clear view. You can also see some wildlife on the mountains if you have a good binoculars. 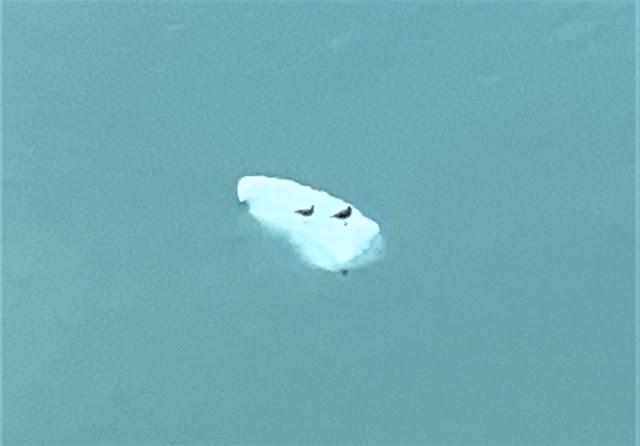 As we got further into the Bay, it got more scenic. The combination of green mountains, blue & white glaciers, and the blue green sea was intoxicating. The pictures don't do it any justice but trust me on this - If you are booking an Alaskan cruise, select one that goes to this place. 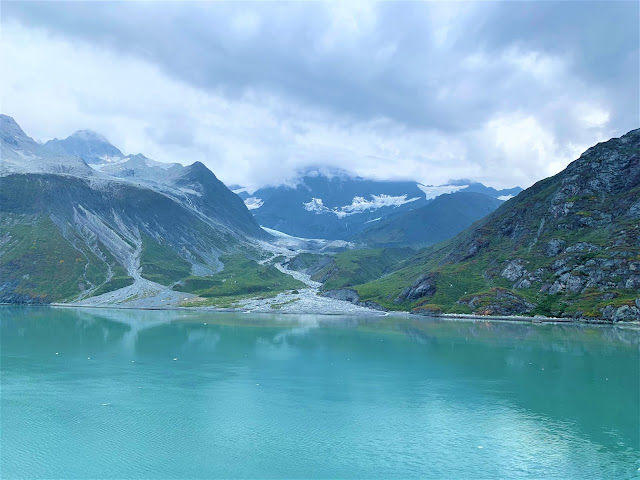 Evenings were show times in the huge Princess Theater with several artists including comedians, magicians, opera singers and dancers. On this day, it was the performance of 'Michael Misko', who is both a magician and a comedian. It was a great show.

There were so many shows, competitions and events going on in the evenings that we sometimes split up to watch different things. I attended a musical concert by a talented singer in a cozy setting which I really enjoyed while my husband attended some music related quiz. 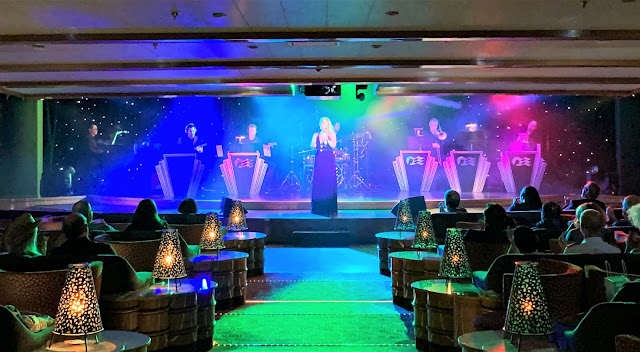 Skagway is a small town in Southeast Alaska, known for the Klondike Gold Rush of 1890s. We didn't spend much time in this town, instead rented a car and headed out to explore. Renting a car at the Skagway port and heading to British Columbia and Yukon areas is one of the best things we did on this cruise. We came across some of the most scenic and serene locations that I ever saw. We absolutely loved this day trip and it definitely warrants a separate blog post which you can find here. For now, I will share a couple of pics from the breathtaking British Columbia! 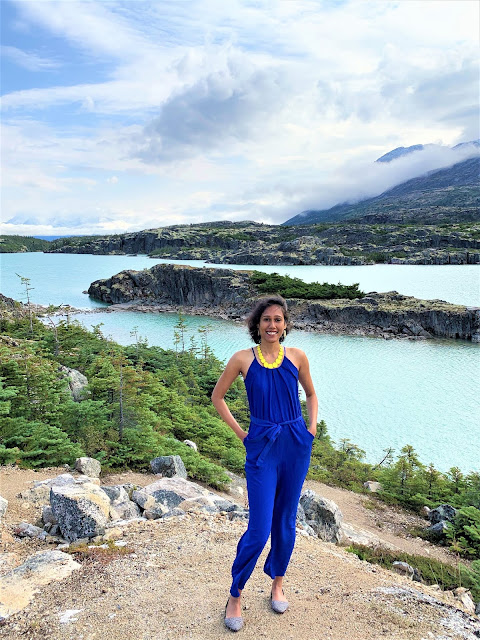 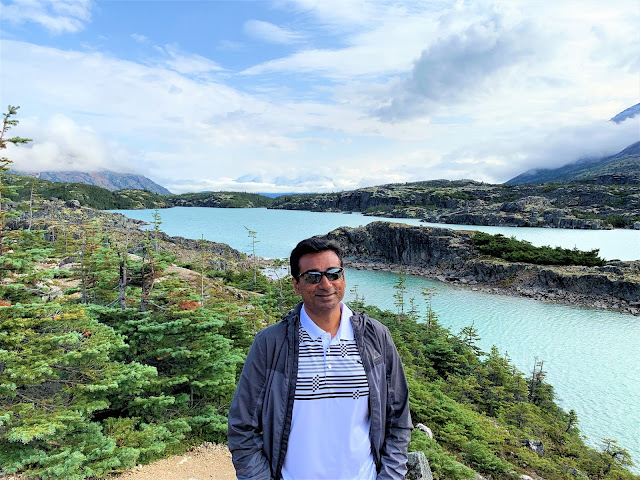 This Emerald Lake in the Yukon Territory was so pretty! 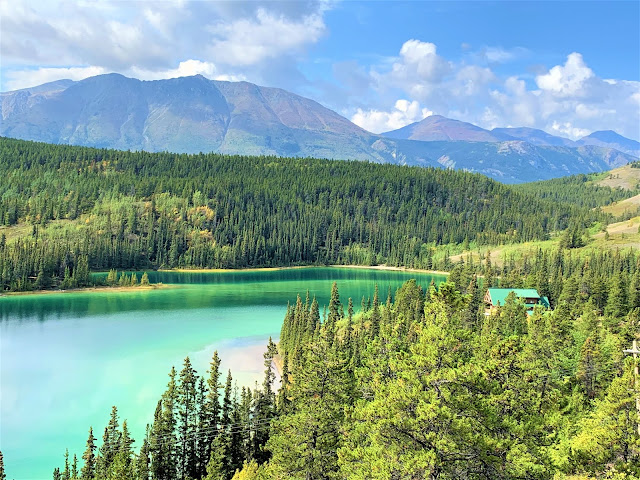 In the evening, there was an elaborate performance by several talented artists with dance, music and onstage orchestra along with several visual effects. Though I am not a big fan of such shows, I must admit it was quite impressive.

Juneau is the capital city of Alaska and is the second largest city in the US by area. Our ship reached Juneau at 6:30 am on Day 5. There is so much to see and do in Juneau, but we had to be back in the ship by 4 pm for a 5 pm departure. So, we decided to just do a 7-mile round trip 'West Glacier Loop' trail to Mendenhall glacier in the Juneau Ice Field. 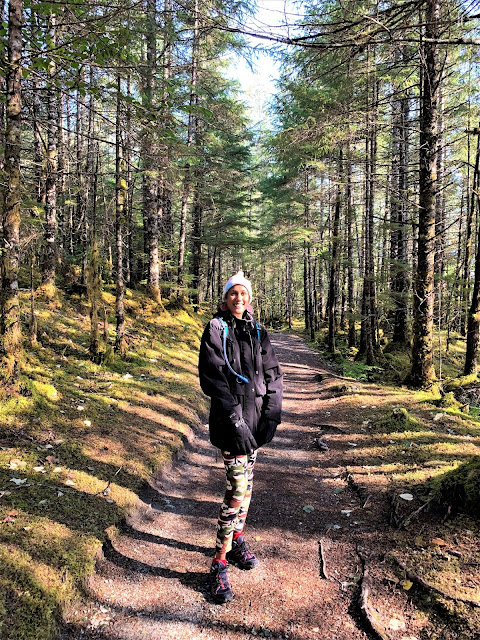 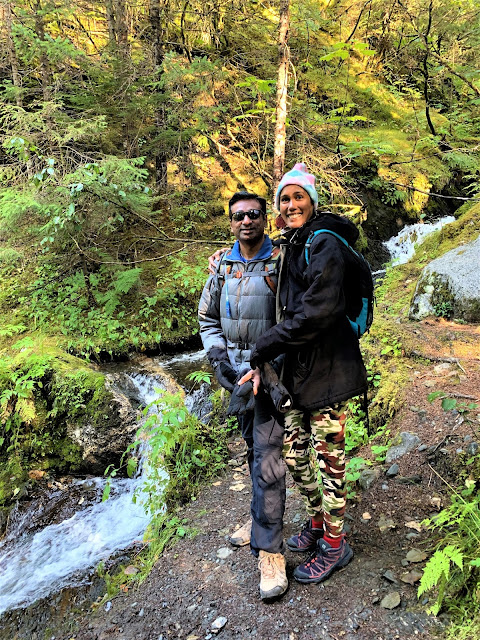 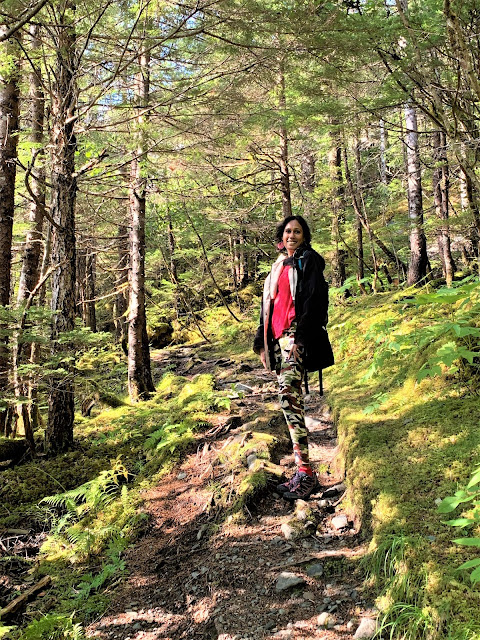 We got out of the ship by 8 am and took a taxi to the Mendenhall campground for this hike. The trail isn't well marked and we weren't sure we were on the right track after a certain point, but we still loved the hike and the the view of the glacier from the top. We had a leisurely lunch at the top with an excellent view of the splendid Mendenhall glacier. What a grand view it was! 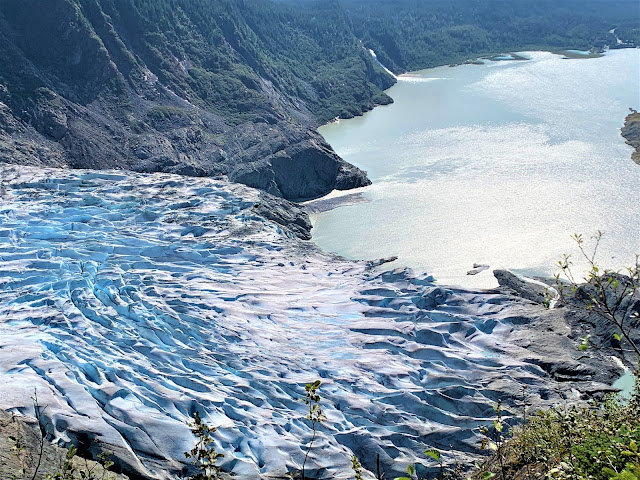 This is exactly how I remember Alaska from my previous trip - Glaciers, mountains and trees with no humans in sight. Since our Exit Glacier hike in 2012, we got much better at hiking and were able to enjoy the views even more now. 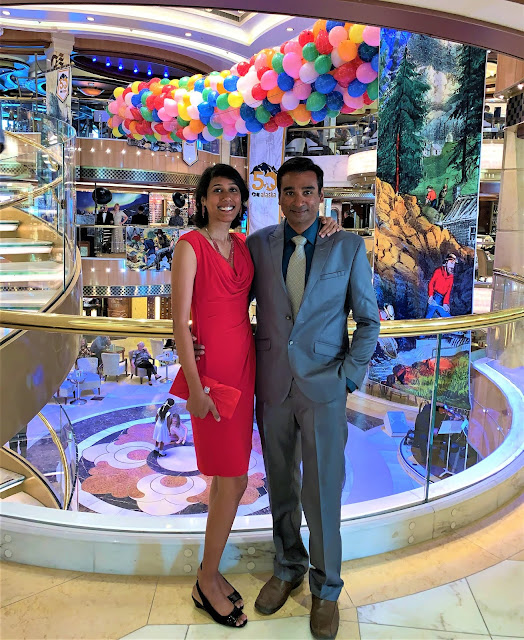 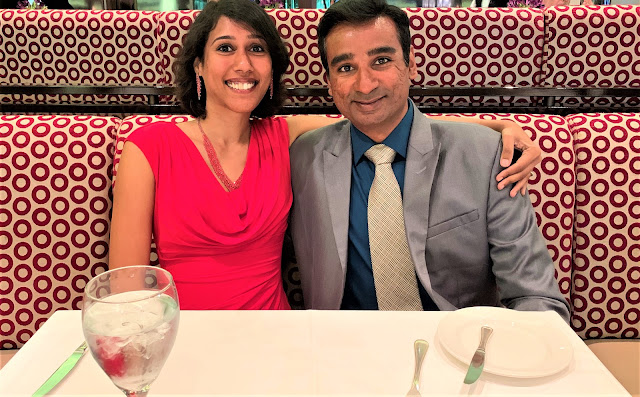 We had another formal dinner night where the chocolate dessert was outstanding, with the perfect mix of sweetness, smoothness and crunchiness. One of the best desserts ever! 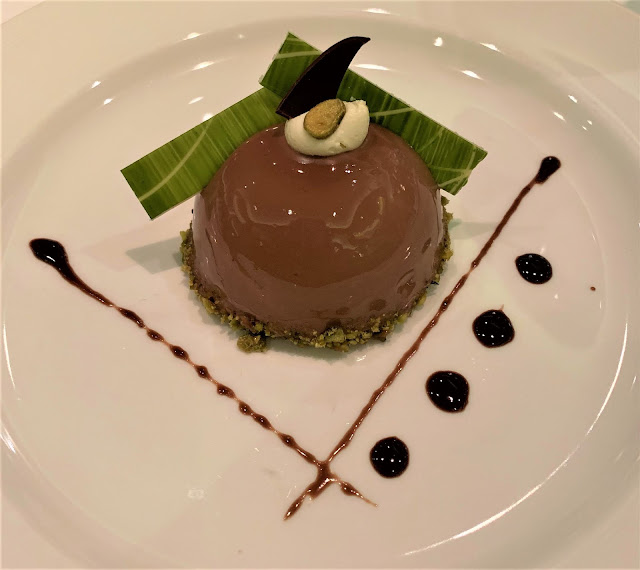 Ketchikan had a cute, colorful and touristy downtown with several shops (mostly jewelry!) and restaurants. It was a beautiful sunny morning and we spent some time strolling in the downtown. Ketchikan was famous for its lumber industry and we wanted to attend one of their popular Lumberjack shows, about which we learned on the cruise the previous night. But the timing was a bit tight, as our Captain decided on an early departure from this place (around 3 pm) due to weather conditions in Vancouver. 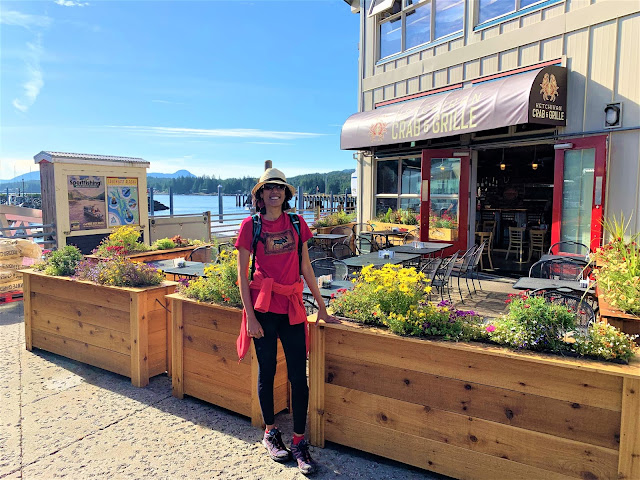 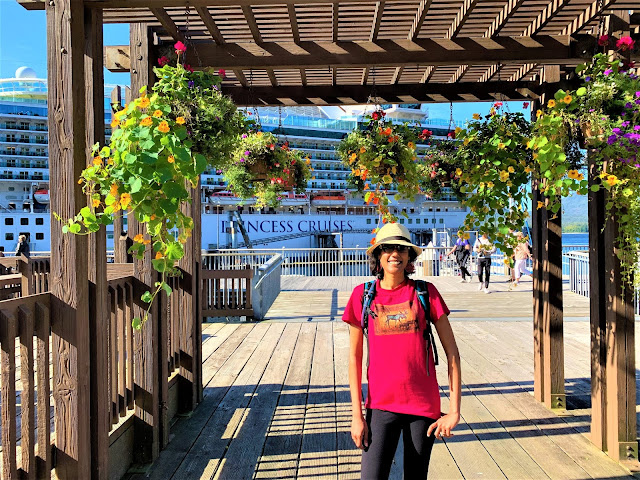 So, instead we went for a ~2 mile 'Rainbird Trail' in the rain forest. Ketchikan is at the tip of the world's largest temperate rain forest in the world, Tongass National Forest, and we got a tiny glimpse of it on this trail. 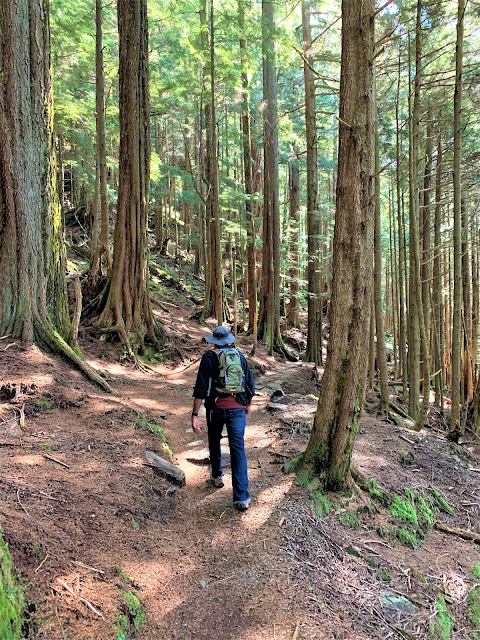 After that, we stopped by one of the several canals on the 'Creek Street' which had a ton of salmon, likely congregated for spawning. It was a sight to watch! No wonder Ketchikan is called the 'Salmon capital of the World.' 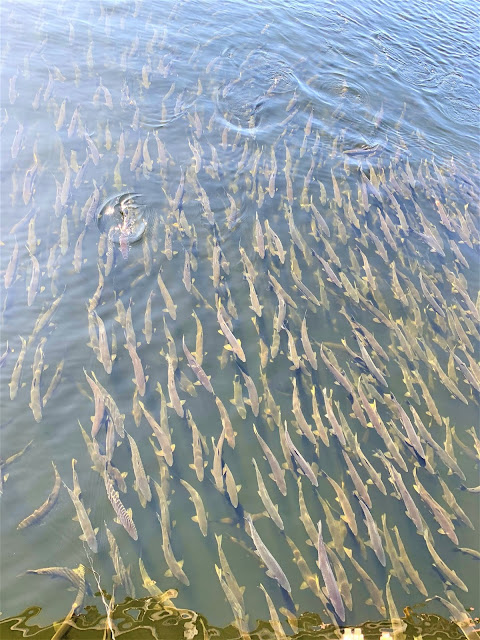 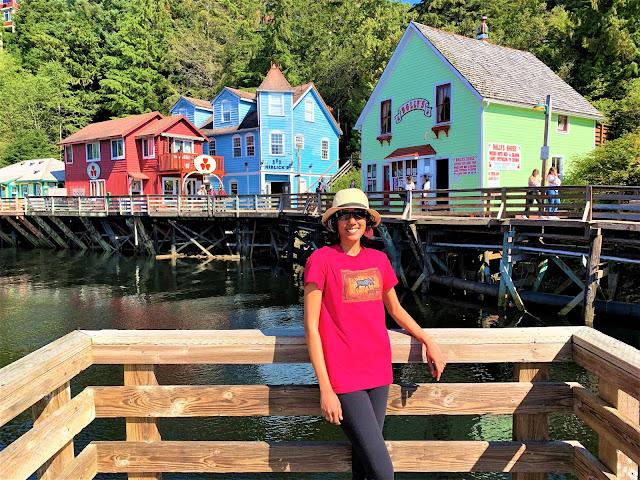 In the evening, there was a comedy show by AJ Jamal, where we laughed so hard. 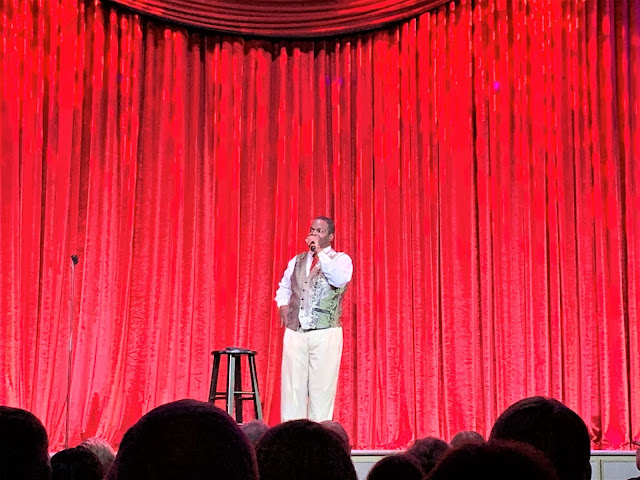 Day 7 - Cruising the Inside Passage:

I spent most of this day reading by the large picture windows on the dining deck, occasionally watching a whale pass by. In the afternoon, we attended our first art auction, where people on the ship bought art worth anywhere between $50 to $100,000 on the spot. It was quite an interesting experience, where we were totally out of depth. 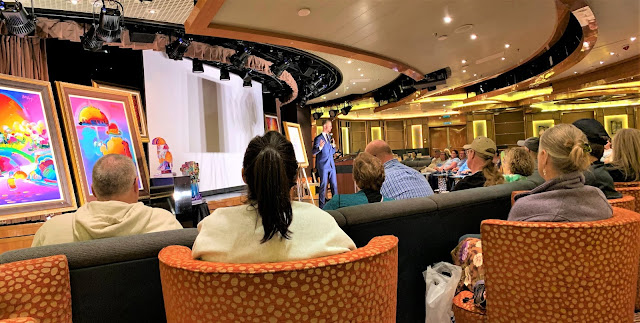 On the last evening, there was a show called 'Voice of the Ocean', similar to 'American Idol' which was very professionally organized with revolving chairs and buzzers for the judges and voting devices for the audience. 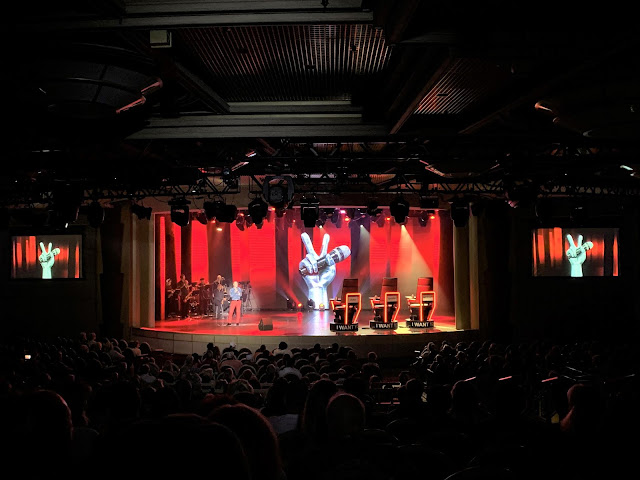 Overall, the shows and performances were very well done while the games and quizzes were average. There were a ton of shopping options (including jewelry - there is something between cruises and jewelry shops, I tell you), casinos, bars and spa services on board. It was like a moving mini-city for 7 nights!

We got off the cruise around 8 am in Vancouver and were warmly greeted by my cousin's family with whom we spent the next couple of days before heading back home. 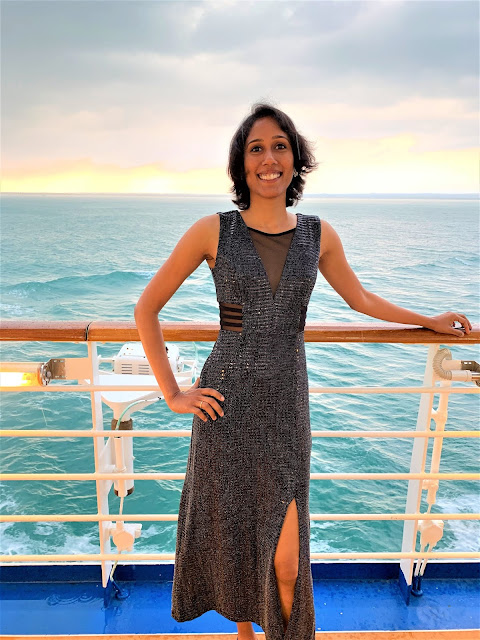 The cruise was a great way to end our memorable 2-week trip in Alaska. It's an easy and leisurely way to travel, where the food & entertainment is completely taken care of and you get to just focus on having fun. Though I wish people waste less food on the ship and that cruise ships don't dump hazardous waste into the ocean, but that remains wishful thinking for now. As for us, we will probably go on a cruise at least once in 10 years to get pampered while visiting beautiful locations.
Labels: Alaska Hiking National Parks